On the night of Rob’s (Michael Stahl-David) going-away party, a seemingly unstoppable monster attacks New York city and amidst the chaos, Rob, along with his friends, journey to rescue his ex-girlfriend Beth (Odette Anabele) and to get to safety.

If found footage films have gotten a pretty bad rep, then Cloverfield is surely an example of how it can be done right; having all the action captured by a video camera perfectly captures the frantic and unpredictable nature of events and keeps the tension and general interest at maximum. Having the film as practically one take, charting the characters’ odyssey over several hours, is very effective and truly gets us feeling as if we were experiencing it all with them and as a bonus, we essentially have T. J. Miller doing a commentary track throughout and this gives the film some welcome laughs along the way.

The inclusion of the “previous footage”, going back to a time when Rob and Beth were in love, as well as the opening and closing “military classification screens”, is also an effective and unsettling touch, even though I correctly predicted what the film’s final shot would be. Also, the film seems to cut back to the previous footage at suspiciously convenient times, going back to moments where Beth just happens to mention Rob’s move to Japan and there are also plenty of moments where I doubted that T. J. Miller would still be filming, regardless of the need to capture everything for future purposes. Like how he conveniently films Marlena being attacked and keeps on holding the camera while traversing a building on the verge of collapse.

Well anyway, the first section of the film works very well as we get to know these everyday characters; through the solid performances of its cast, we go along with them through their nightmarish ordeal and effortlessly support them throughout. For the most part, they avoid doing the whole “characters making dumb decisions” bit although I still maintain that their decision to enter a building on the verge of collapsing, one that’s leaning precariously on another building, was completely loco and I definitely shouted that to the screen. Still, the characters are good and their dialogue is authentic and truly sounds improvised, adding to the unpredictability of it all. There are also plenty of heartfelt moments which get us to truly feel for the central characters.

All in all, Cloverfield is intense, thrilling, exciting and maintains a relentless, frantic pace while at the same time, knowing exactly when to take a breather. The action scenes are well designed, the special effects work and the interest level is kept at a high standard throughout, never boring or overstuffed. The distinct lack of a musical score is also wonderfully effective; the silence, particularly at the beginning and end, can get incredibly eerie and spooky. 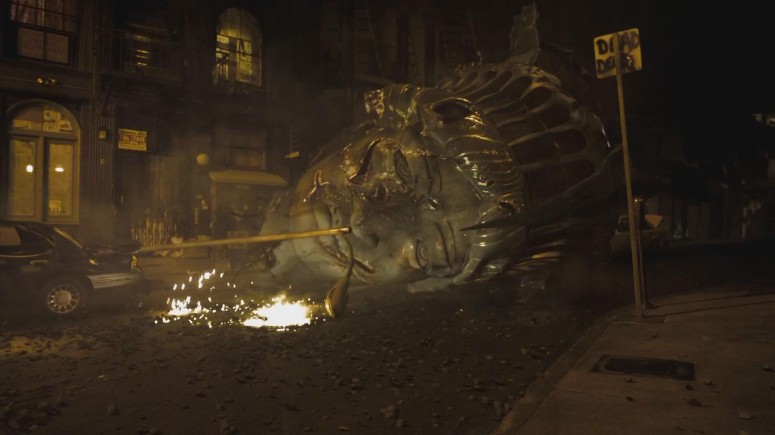