Another year and it’s time once again to celebrate the musical maestro, composer James Horner, in this second annual blogathon hosted by Becky over at Film Music Central.

When I chose to look at An American Tail last year, I mentioned that it was a close call between choosing that film and The Land Before Time so when news of the return of the James Horner blogathon rolled around, it took me all of two seconds to decide that I’d pick this here animated classic. Another year, another Don Bluth directed, animated kids film from the mid to late eighties; next year I’ll be sure to pick a live action film for a change!

But anyway, I watched this film a fair amount of times on videotape when I was growing up – the story of five dinosaurs, Littlefoot, Cera, Ducky, Petrie and Spike, journeying to the lush, verdant “Great Valley” to be reunited with their families, to escape the barren, lifeless wasteland and to avoid the dangerous T-Rex Sharptooth. The Land Before Time was more my sister’s film than mine but I must have watched it a decent amount of times because when I watched it again, after a gap of about 16 years or so, a lot of the dialogue was still so familiar to me. Later on, I was also surprised to learn that after the 1988 feature film, there were actually twelve direct-to-video sequels and a subsequent TV series. No, I haven’t seen any of them, nor would I care to. Why sully the memory of this beloved childhood classic?

And one thing that makes The Land Before Time so memorable is the accompanying James Horner score. Like An American Tail, the music comes courtesy of the London Symphony Orchestra and the Choir of Kings College as well as the Choristers of St. Paul’s Cathedral and the Ladies Chorus, all of which gives the film a rich, lush and majestic sound that successfully stirs so many emotions and is effortlessly capable of staying with you for your whole life – no mean feat! This accompaniment could only ever really work within an animated film or more appropriately, an opera or ballet; this is particularly appropriate since there is indeed an overture and the film also features a couple of individual sequences that go alongside the main narrative. There are also clear act breaks, times in which the orchestra stops as the lights on the stage go down . . .

The main thing I noticed by far during my most recent watch of this film is just how much the score dominates the film; the film is only 66 minutes long (a fact that honestly surprised me – these films seem so much longer when we’re young, don’t they?!) and Horner’s score is essentially heard for the entirety, stopping for the first time only after the first half hour. By my count, there are only three instances of the music stopping completely and in rewatching, I came to the conclusion that the film can be considered a vehicle for Horner’s music, as if the score is the main attraction and the onscreen images simply exist to illustrate, to visually tell the story that the music is telling and not vice versa. 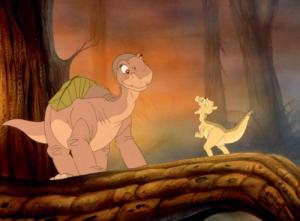 As mentioned before, the film opens with its overture, introducing the musical elements that make the score so memorable. We hear the angelic vocals, a build-up of the brass section and an orchestral swelling as the opening narration begins, music constantly playing underneath it. Early on, an instrumental rendition of the final song is introduced as Littlefoot is born, played on a flute, and it is heard at various points throughout the film, vocalised beautifully, but also with a certain melancholy, by The Ladies Chorus. That’s also a major part of the score’s appeal: it conveys plenty of hope, joy and wonder but also sadness, loneliness and melancholy. (SNIFF)

It’s also worth mentioning that different characters essentially have their own themes; much like Peter and the Wolf I guess, different orchestral sections represent different characters. When the sweet natured Ducky is introduced, the woodwind section is prevalent and her theme is noticeably jaunty, playful and fun to illustrate her character – Yep Yep Yep! (Sorry, I just HAD to get that in there somehow!). Elsewhere, the stubborn Cera is accompanied by an occasional clash of drums to show her brash personality and later on, Spike is introduced with the brass section, using plenty of deep tubas and trombones since he is heavy and slow moving.

As well as the more moving, emotional pieces, there is plenty of “high octane” music that accompanies the scenes in which the characters face danger from other dinosaurs, most noticeably from “Sharptooth”, the antagonistic Tyrannosaurus Rex. There is a distinct ominous build-up before his first attack and when it occurs, the musical pace is understandably quicker and is effectively dramatic and exciting, especially since it is combined with dizzying, frantic onscreen images. Silence also works particularly well in building up a sense of uncertainty and dread ahead of the final battle. 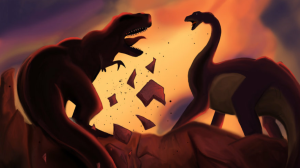 And finally, the song If We Hold On Together is played over the ending credits; written by James Horner & Will Jennings and performed by the great Diana Ross, it’s a perfect way to finish the film because . . . well, it’s beautiful, simple as. It successfully conveys that integral feeling of togetherness, tugs at the ol’ heartstrings and stays in the memory for a good long while. Well the link is there, you can hear for yourselves – get ready to FEEL!

So all in all, the music of The Land Before Time is, just like An American Tail, an expertly crafted symphony of beauty, adventure, danger and so much genuine emotion. Capable of melting the iciest heart (i.e. mine), it is lovingly crafted, pure, majestic and simply a wonder to experience. It is a soundtrack that endures through the years and, judging by a few random YouTube comments, is capable of taking you back in time, making you feel like a kid again, watching this film. I am certainly grateful for the chance to revisit the film and have enjoyed expressing my thoughts on why it’s so wonderful, the film and the music both.