Director Neil Marshall’s retelling of the story of the big, bad and very red paranormal investigator stars Stranger Things‘ David Harbour as Anung Un Rama/Hellboy, a half demon with a mean right fist and a pretty big gun who fights against supernatural creatures for the Bureau for Paranormal Research and Defence, under the care of his adoptive father Professor Bruttenholm (Ian McShane); while starting to question his own place in the world, he is soon called upon to help defeat the ancient sorceress Nimue (Milla Jovovich), a malevolent force once defeated by King Arthur and Merlin, who has her sights set on unleashing a plague across the world, while also taking a particular interest in Hellboy.

First of all, I was well aware of this film’s particularly bad reception going in, having seen nothing but single star reviews on Letterboxd and reading some less than encouraging comments on Twitter, but I still had a fundamental interest in seeing the film and I also thought about how there were other critically derided films like Fant4stic, The Snowman and maybe even Venom that I didn’t mind so who knows? Maybe I’d see something positive in it.

Unfortunately in this case, the bad reception is totally justified (to me, anyway) because this new Hellboy is virtually irredeemable – an ugly and badly written mess of a film that has no real reason to exist.

The problems begin with the film’s opening “flashback” sequence where, with the assistance of Ian McShane’s anachronistic, sweary and expositional narration, we see the evil Blood Queen Nimue getting hacked to bits by King Arthur and Merlin with a foreboding warning of the evil that will be unleashed if she were ever “humpty dumptied back together”. First off, yes, this movie does work Arthurian legend into the story (isn’t that what ultimately killed Michael Bay’s Transformers franchise?) in an anachronistic, irreverent, Guy Ritchie style and it is just as silly, dull and ridiculous as it sounds; alongside this, we also get a glimpse at the kind of dialogue that we’re in for (“GASP! Excalibur!”) and it instantly announces itself to be poor, nonsensical, awkward and far too coarse. This opening sequence is also hastily edited, poorly designed, the score is rough, and the gore is inappropriate and unpleasant.

And that’s just the opening! 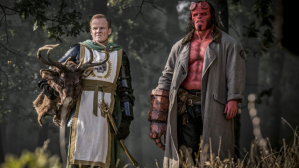 The problems seen at the beginning go on to gradually plague the rest of the film because Hellboy ends up as a mean spirited, overly crass and overall unpleasant affair that leaves a bit of a bad taste in your mouth. With this reboot, the filmmakers have opted to go down a darker route, wanting to cash in on the success of other R-rated superhero films, but Neil Marshall lets it all get out of hand and in trying to make the film edgy, adult and dark, the film ends up just being offensive – a far cry from Guillermo del Toro’s films that had just the right amount of darkness, thought up by someone who truly understands this kind of thing, but also heart, soul and an admirable feeling of family and friendship.

In keeping with the more adult tone, Hellboy has an inordinate and unnecessary amount of swearing included in the script. Me, I can fully get on board with bad language in a film provided it feels natural and it blends seamlessly into the story but here, it’s overused and very very noticeable, especially with Stephen Graham’s villainous character Gruagach, an evil pig creature whose signature phrase seemed to be “Hellboy, you f*ckin’ bastard!”. Repeated multiple times, along with some other choice words thrown in, and all delivered in his signature Scouse accent. Awkward.

Andrew Cosby’s script problems don’t end there either because the plot of the film is unimaginative, dull and often ridiculous, not having a clear idea on just what it wants to say and ultimately boiling down to an “ancient evil wants to destroy the world unless the hero steps up and stops them” type deal. This story has none of the imagination or soul that the maestro del Toro would’ve brought, the dialogue is weak, and when it reintroduces the Arthurian legend elements, things start to get pitiful, pathetic and eye-roll incuding, especially when it comes to a particularly ridiculous third act twist that I shan’t spoil here.

And in keeping with the film’s unpleasant tone, the CGI is really quite atrocious and the creatures look hideous and deeply disturbing – but not in a good way, if you know what I mean. Taking inspiration from the ugliness of films like Suicide Squad and 2017’s The Mummy, the production design, costume design, character design and cinematography is dismal and drab and with those “special” effects, the worst offenders are found in Hellboy’s fight against three giants (disgustingly gory, accompanied by blaring music, and even the giants all swear!), the visit to the “Baba Yaga” (clearly trying to emulate del Toro’s beloved monster designs), and two scenes where the spirits of two deceased characters flow straight out of poor Sasha Lane’s mouth, incorporating the actors’ faces onto a most grotesque design. The editing is lacklustre and as hinted at before, both Benjamin Wallfisch’s score is surprisingly poor and the “rock” vibe given off by some of the songs is uncomfortable and just plain noisy. On a technical level, this film really fails across the board.

But if the film has any saving graces, then it’s David Harbour because in the central role, the one that Ron Perlman really made his own, Harbour really really tries. As “Red”, he acts more like an overgrown teenager than Perlman did but Harbour’s Hellboy is still a tough badass with a hidden heart who occasionally gives a cranky comment or two and Harbour is a decent choice for the character, despite his unappealing design; he mostly nails the comedic lines, he throws himself into the action with aplomb and he’s an overall good sport throughout.

Plus, we’ve got Sasha Lane as Hellboy’s psychic friend/partner Alice Monaghan and it’s always great to see her in stuff; despite shouldering a certain amount of the bad writing, she avails herself well, she gets stuck into the action and overall, she’s always a pleasure to see whenever she’s on screen. Elsewhere, Milla Jovovich is as decent as can be expected as primary antagonist Nimue; there’s some attempt at deeper characterisation but ultimately, she’s a mix of Enchantress, Rita Repulsa, En Sabah Nur (Apocalypse) and Sofia Boutella’s Mummy – a stock villain character with a chip on her shoulder about how the world is today (as well as a cleavage bearing outfit that I’m sure wasn’t necessary), ultimately resorting to wanton destruction, dramatic monologues and general apocalypse bringing. You know, that old chestnut. Mwah ha ha.

Ian McShane plays a tougher and less forgiving Professor Broom and while his charming personality is most welcome in other films, he is done a disservice by the abysmal script and is totally out of place here, Daniel Dae Kim is good as Ben Daimio, a soldier who can transform into a jaguar, Sophie Okonedo is misused as blind fortune teller Lady Hatton who’s not in the film for very long (Okonedo has Wild Rose under her belt this year though, so she’s fine!), and Stephen Graham voices that ultra violent and incredibly sweary “pig monster” Gruagagh but unfortunately, this is probably the lowest point of his career so far – he’s an amazing actor but his unmistakable Scouse accent is completely wrong for the part and at the end of the day, Gruagagh is an incredibly annoying, offensive and irredeemable character who only serves to make the film as uncomfortable as possible.

Oh, and Thomas Hayden Church plays a famed wartime hero known as “The Lobster”. (LONG PAUSE) Yeah, I don’t know quite what to make of that.

There’s also a mid-credits scene. Maybe even a post-credits one but . . . do you really want to hang around that long after the film? I sure didn’t. Let me know if there was one, would ya?