So here we are then, my first review of the new year and it’s one that I missed out on seeing in the cinema, despite so many glowing reviews. But could it possibly live up to all the hype or would it turn out like Green Room where, despite all the positive feedback, I was left disappointed?

Well friends, it thankfully turned out to be the former as I LOVED it and had I seen it during its cinema run, it would have certainly broken my top ten. Maybe even the number one spot. There you go, I’ve saved you the trouble of reading my review.

Seriously though, Sing Street is set in Ireland and is about Conor (Ferdia Walsh-Peelo) who has to move to a new school and soon finds himself infatuated with mysterious model Raphina (Lucy Boynton), quickly telling her that he’s in a band and that she should be in one of their videos. He then promptly goes about putting a band together, with guidance from his older brother Brendan (Jack Reynor).

I have to start by mentioning the music because it’s awesome. For the soundtrack, we have great tracks from the likes of Duran Duran, The Clash, The Jam, The Cure, Hall and Oates, Joe Jackson and M, with mentions of Depeche Mode, Joy Division and Sex Pistols; it’s an impressive collection of tracks and writer/director John Carney’s love of music is apparent. And as if that wasn’t enough, the original songs are excellent; “The Riddle of the Model” is particularly wonderful and during that amazing scene, I was fully invested in the film and on a noticeable high. Sing Street seems to have the same love of music as films like School of Rock and Frank.

The cast is wonderful and thoroughly passionate about the film that they’re in. In particular, Mark McKenna is great as Conor’s bunny loving, song writing partner Eamon and Jack Reynor is so charismatic as the older brother, a wonderfully written, deep, lovable character, to be sure. Everybody has fun and they play their characters excellently, though three members of the band don’t really have that much to do.

The film has a good mix of humour, drama and sadness and it is all deftly balanced throughout. It is very funny a lot of the time, much of it has you smiling, really getting in to the musical numbers but it is also genuinely moving and brings tears to your eyes without being too glum or emotionally manipulative. 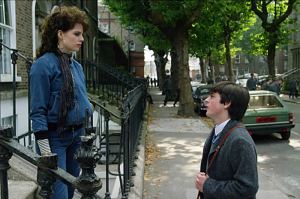 With thoroughly likable characters and insanely awesome music, Sing Street hits all the right notes and is a funny, moving, entertaining film.