Gardner Elliot (Asa Butterfield) is the first child born on Mars and for the first sixteen years of his life, he is brought up in a NASA colony, unable to go back to Earth due to the fact that his body wouldn’t be able to handle the change. While on Mars, he regularly converses with Tulsa (Britt Robertson), a girl living in Colorado who has been living in foster care her whole life. Concerned for his well being, worried that he hasn’t interacted with enough people, astronaut Kendra (Carla Gugino) arranges for him to visit Earth and while there, Gardner breaks free, meets up with Tulsa and the two of them embark on a journey to find his father.

The film’s biggest problem by quite a long way is Allan Loeb’s screenplay; in a nutshell, it is sappy, cliche-ridden, trite and emotionally manipulative, full of dialogue that doesn’t ring true in the slightest and characters often stating the blindingly obvious. Perhaps ideally aimed at pre-teens (the first section is essentially a Young Adult version of The Martian), the script is pretty ridiculous – with the inescapable declarations of love, long gazes into each other’s eyes and awkward, cheesy dialogue, which is all certainly capable of illiciting sighs and eye-rolls from the audience.

The pretty dull first half takes forever to get going (with a far too generous use of slo-mo) and the story also features plenty of incredulous moments such as cars being started with an app, planes inexplicably being fixed and far too many dim-witted people leaving their cars and tablets conveniently unattended for the protagonists to constantly steal. So it’s no surprise then that as the film was finishing, I was curious to know who wrote it and having found out, I now realise that Allen Loeb deserves to exiled. To Mars. In addition, Andrew Lockington’s score is unrelentingly corny, cheesy and saccharine, disappointingly filling every scene with schmaltz and faux sentimentality. Lockington – go join Loeb on Mars!

Asa Butterfield heads up the cast and, while he is more bearable than he was in Miss Peregrine, his performance is quite disjointed; he alternates between being a hollow, moody, expressssionless teen to a goofy, wide-eyed alien visitor and then to an eye-roll inducing sappy romantic. So while he’s not completely insufferable, he’s bit all over the place and you may end up only caring about what happens to him for the sake of finishing the story. Alongside this and Miss Peregrine, it seems like Hugo was just a fluke . . .

As Tulsa, Britt Robertson is rather good in this film, quite an achievement since she has to spout some pretty terrible lines and her character is unforgivingly cliched (living in foster care her whole life, mad at the world, solitary, standoffish – but of course, it is “all just an act”, as is so clearly spelled out by Gardner. In those exact words!). Despite the burden of bad writing, there is something very likable about her, she seems to make Asa Butterfield a better actor and I thought that she was the main thing holding it all together.

Butterfield and Robertson have some pretty good chemistry (far more than Butterfield did with Ella Purnell in Miss Peregrine), though the 7 year age gap between the two actors can get a little awkward to witness, especially in the rather uncomfortable – ahem – sex scene. I’m pretty sure there was an air of discomfort and disbelief in the cinema at that point, especially since it was another scene filled with cringe-inducing, schmaltzy dialogue.

Elsewhere, Carla Gugino does as well as she can with her share of the awful dialogue, Gary Oldman (looking like Nick Nolte and Ricky Tomlinson’s lovechild) has a pretty unmemorable role and B.D. Wong is surprisingly bad as NASA director Tom. And Gil Birmingham even shows up. How did that happen? To be fair though, he fares pretty well, not losing any street cred after Hell or High Water.

The film isn’t completely unsalvagable as the scenes where Gardner sees Earth through alien eyes are quite interesting and the whole Paddington-esque sequences where he bumblingly tries to understand automatic doors and is amazed by fire and rainfall are pretty good, certainly the highlights of the film where Butterfield finally gets to cut loose. The whole “road trip” element, set to some great tunes, is pretty nice and there are a few well shot, tranquil landscapes, although the shot of Earth, as Gardner approaches the planet, looked wrong. 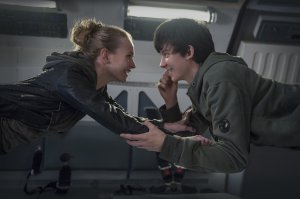 Not completely unsalvagable but still a pretty poor film with terrible writing and a sappy score.