Under the “Film Reviews” category, this would appear to be my 99th post, but then again I did review both “Star Wars VII” and “The Hateful Eight” in one post so this one will officially be my 100th. And yes, I counted them all individually on my “Find a Review” page . . .

Receiving an Academy Award nomination for Best Animated Feature, Song of the Sea is based on Irish folklore and is about 10 year old Ben who lives with his father Conor, sheepdog Cú and his young, mute sister Saoirse at an island lighthouse. After a tragic event several years previously, Ben’s father is a broken man and Ben himself deeply resents his younger sister, who is soon revealed to be a Selkie, a mythical seal-child. After the children’s grandmother takes them away to live with her in the city, Ben runs away, travelling to get back home to Cú, with Saorise in tow. Then, Ben soon learns of what Saorise is, that the owl-witch Macha is after her and that Saorise needs her Selkie coat so that she can sing and free all the faeries that Macha has turned to stone.

I distinctly remember the first time that I watched this because afterwards, I was convinced that it was the film that has come the closest to making me cry in nearly 15 years, emotionally repressed guy that I am. So yes, Song of the Sea is one of the most beautiful and genuinely moving films of recent memory and deserves to be counted in the upper echelons of great animated films.

On the surface, much of the beauty comes from the magnificent music, which is ever present, only a few scenes are without musical accompaniment. The score is angelic, haunting, mesmerising and oh so many positive words; the beautiful tunes and pitch perfect singing, much of it sung in Irish Gaelic, will stay with you for a good long while and will melt the heart of the most emotionally repressed miser (i. e. me).

The film also has a unique design that can initially seem quite off putting but it doesn’t take long to get used to and witnessing the imaginative, fascinating hand drawn artwork  becomes a pleasure and adds to the film’s merits. Plus, in this age of advanced technology, 3D and CGI, it’s worth putting on a film like this to remind us that hand drawn animation still works and is on par with the sleekest computer generated feature. After all, is it not the substance that truly makes a film shine?

Song of the Sea has a bright, imaginative story full of magic, myth, faeries, prophecies and the like and all of this is certainly appealing but at its heart, the film also carries mature, affecting themes of loss, pain and grief as well as family, friendship and love. Similar to films like Star Trek V and Inside Out, it suggests that carrying the burdens of pain and sadness makes us human; in this respect, the character of Macha is particularly fascinating. While initially set up to simply be a villain, we soon learn that in her own misguided way, she strives to help others by simply removing their pain, turning them to stone in the process. She once did the same thing to her son Mac Lir, who was in so much pain that he cried a whole ocean and it was through love, not wanting him to hurt any more, that Macha removed all of his sadness and hurt.

All of this gives Song of the Sea many unique, well rounded characters who we effortlessly support and care about.

Elsewhere the voice cast, which includes Brendan Gleeson as both Conor and Mac Lir, is top notch and there is a decent amount of humour to be found as well; not laugh out loud comedy but warm, affectionate chuckles. Plus, Saoirse, Cú and the seals are impossibly adorable. 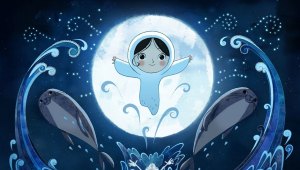