Series two of the critically acclaimed Netflix series takes us back into the life of Dev (Aziz Ansari) who, as we left him at the end of the first series, has spontaneously taken a pasta making apprenticeship in Modena, Italy. Meeting a new love interest in the charming Francesca (Alessandra Mastronardi), Dev soon finds himself back in New York hosting a televised cupcake competition show and dealing with such trials and tribulations as online dating and religion.

First of all, the series gets off to a glorious start with its opening two episodes set in Italy; straight off the bat, it opens with a perfect joke involving an alarm clock (opening the series with an f-bomb, just like in season one) and that endearing Master of None humour and heart is instantly brought back as we get to know some new characters, including the charming Francesca, as well as familiar face Arnold, played wonderfully by Eric Wareheim. The series’ opening episode is effectively shown in monochrome, an affectionate homage to Italian neo-realism films like Bicycle Thieves and La Dolce Vita, and both this and its following episode “La Nozze” are the highlights of the series; there is an incredibly winning blend of humour and heart, the Italian scenery is incredible and the double act of Dev and Arnold, travelling around enjoying the local cuisine, is just perfect. Master of None excels in making you laugh and feel, especially since the second episode allows Arnold to deliver some properly heartfelt moments and sees Dev still conversing with Rachel, still dealing with the events of season one. 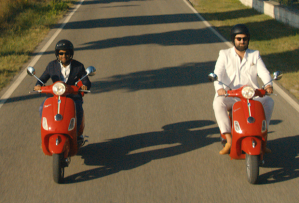 After Italy, the narrative shifts back to New York, so it’s somewhat “back to business” as we have some new episodes looking at the crazy world of online dating and issues of religion as well as a unique, Short Cuts style episode that shifts focus away from Dev and takes a glimpse into the lives of many different New York residents, including a hotel concierge, a Nigerian (I think) cab driver and a deaf shop clerk, in a particularly exquisite segment that is completely devoid of sound, giving something of an insight into how she lives her life. A later episode also shifts focus to Denise (Lena Waithe) and looks at how she grew up, coming to terms with her sexuality and the immense pressure of telling her mother (the great Angela Bassett), grandmother and aunt. This episode is another series highlight as it once again demonstrates the series’ capacity for humour, heart and a deep understanding of human nature; clearly, the second series of Master of None looks to do something a little different and allows new and different characters to come into the spotlight.

Elsewhere, the series offers a generous helping of fine episodes but a couple are a little uneven and I believe that the series gets a little bumpy at times. The “Religion” episode promises to shine a light on relevant issues relating to modern religion and while it wraps up fairly effectively, it doesn’t make as much of an impact as it could have and is ultimately too easy to simply walk away from (though it does bring back Dev’s AWESOME father – a wonderful addition to the series!) Other episodes such as “Door #3” and “The Dinner Party” are pretty great but regrettably pail in comparison to other episodes, especially since the latter includes a John Legend performance that nearly kills the episode and left me pretending that it never happened at all.

But then again, the character of Chef Jeff is brought in, played insanely awesomely by Bobby Cannavale; he brings a welcome jolt of energy to the series, his delivery is absolutely flawless and the screen comes to life wherever he’s on. The storyline involving him and Dev also leads to an unexpectedly tense conclusion and gives us some proper drama and intrigue in the final episode. 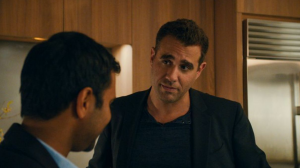 A large part of the series is Dev’s newfound relationship with Francesca, the young woman from Modena with whom Dev develops an instant attraction to and grows to care deeply for, a feeling that is indeed mutual but is scuppered by the fact that Francesca has a boyfriend, later fiancee. There are a great many scenes where it is wonderful to watch the relationship develop (which include an Autumnal visit to an open air museum, a pyjama dance party and a . . . super exciting trip to a pharmacy) and both Aziz Ansari and Alessandra Mastronardi share some charming chemistry but in all honesty, it tends to wear a bit thin towards the end of the series as it all ultimately boils down to the whole “two people are in love but one of them’s engaged, the other guy’s never around, will they/won’t they?” situation that I can’t help but feel has been done to death in other stories. The ordering of the episodes also means that the Dev/Francesca narrative doesn’t flow as well as it should and the last two episodes contain a fair amount of heavy handedness in the writing as well as some implausible plot developments, including an all too convenient, and hard to accept, snow storm.

But as I say, Ansari and Mastronardi pull it off well and there are some genuinely sweet and wonderful romantic moments, it just tends to get a little uneven and isn’t quite as involving as the Dev/Rachel relationship in season one.

And also, I was a bit put off by how it all ended; there’s no proper closure and, if this is indeed the final series as I think I read on Twitter, it all ends with so many questions left unanswered.

Whilst not quite living up to the immense high standard set by its predecessor, Master of None is still a winner due to its genuine heart and humour. It is lovingly written, performed and does something a little different by giving other characters a chance to shine.

See Also: Final Thoughts: “Master of None” Series One

6 thoughts on “Final Thoughts: “Master of None” Series Two”