Inspired by the unique phenomenon which ran from the mid to late eighties, this brand new Netflix series stars Alison Brie as Ruth Wilder, a struggling actress who grows increasingly annoyed with the lack of strong, credible female roles in the business and who eventually attends an audition at a local gym for the new all-female wrestling show GLOW, the Gorgeous Ladies of Wrestling, helmed by horror B-movie director Sam Sylvia (Marc Maron). Throwing herself into the process, along with a small band of misfits, she attempts to invent a unique wrestling persona while at the same time, dealing with the collapse of her friendship with former best friend Debbie Eagan (Betty Gilpin), a popular soap opera actress who also finds herself drawn into the GLOW process.

Firstly, GLOW takes a rather lengthy amount of time to truly get going and doesn’t truly come to life until about halfway through; despite a scattering of fun, comical scenes, coupled with its overall unique premise, a great deal of the early episodes take themselves far too seriously and the tone is often too heavy and melodramatic. Straight off the bat, the series appears to carry storylines that one would find in a soap opera, with dramas revolving around infidelities, broken friendships, surprise pregnancies, familial revelations and coming to terms with your identity. As I say, it’s all occasionally broken up by some comedic scenes but overall, the show is far too serious for its own good and those early episodes are noticably glum and low-energy.

What’s more, a lot of the story ideas seem half-baked – introduced in one scene but then forgotten about by the next episode; plot threads such as wrestling trainer Cherry’s past relationship with Sam and Sheila the She-Wolf’s acceptance of her identity seem to be perfect examples, since the writing is too heavy handed and a bit predictable. There seems to be a lack of cohesion as the overall series narrative doesn’t flow as well as it should and you could surmise that the different writers had their own individual ideas of how the show should be done.

But having said that, once all the pieces are put into place, the show actually delivers some wonderful wrestling scenes, most noticeably in episodes seven and ten, and witnessing the colorful characters come to life for the first time, combined with some excellent non-PC moments that the original GLOW was known for, gives the show a much needed jolt of energy and those scenes had me unashamedly smiling and punching the air triumphantly. It’s just a shame that these great wrestling scenes are only really found in these two episodes.

GLOW also has a fun, loveable bunch of characters, all played well by its ensemble cast. Mad Men and Bojack Horseman‘s Alison Brie takes centre stage as Ruth Wilder and she has a ball clowning it up, gradually developing a commitment and passion for the show while working hard to invent her wrestling persona (Zoya the Destroya, who is awesome!); Brie handles both the comedy and the drama well and, with those big sparkling eyes of hers, is a fine lead for the show. Betty Gilpin is also a solid co-lead as Debbie; she also delivers in both the comedy and dramatic stakes and she and Brie work well together. And Marc Maron also does fine work as director Sam Sylvia; initially appearing as a bit of a sleaze with a colourful vocabulary and a tendancy to say exactly what’s on his mind, we soon get to see him as a really supportive character, becoming something of a guardian figure and confidante to the girls, someone who truly believes in the show and who is a loyal and trustworthy ally, despite his rough edges. Maron is perfectly suited to the role and is a boon to the series.

As for the small group of wrestlers, every one of them has something to do and there’s no one who’s really forgotten about but a lot of them do blend into the background and many of them aren’t developed properly at all. Standing out from the rest, Jackie Tohn is outrageously crass and anarchic as Melrose and Britney Young is charming and sweet as the Mountain Fiji-inspired Machu Pichu. Particularly at the end of the series, the wrestlers develop a strong familial bond and watching them spend time together having fun is genuinely heartwarming and smile-inducing, a very positive part of the series. I also appreciate how many of them were clearly inspired by GLOW’s original lineup, with clear references to The Housewives, Colonel Ninotchka and Mt. Fiji.

Plus, Rich Sommer has a supporting role – another Mad Men alum alongside Alison Brie. Keeping it in the family!

Elsewhere, the show is well designed, the costumes/makeup/hair are all great and the series has some recognisable music tracks from the likes of Tears for Fears, Sylvester, Billy Joel and Queen and David Bowie. 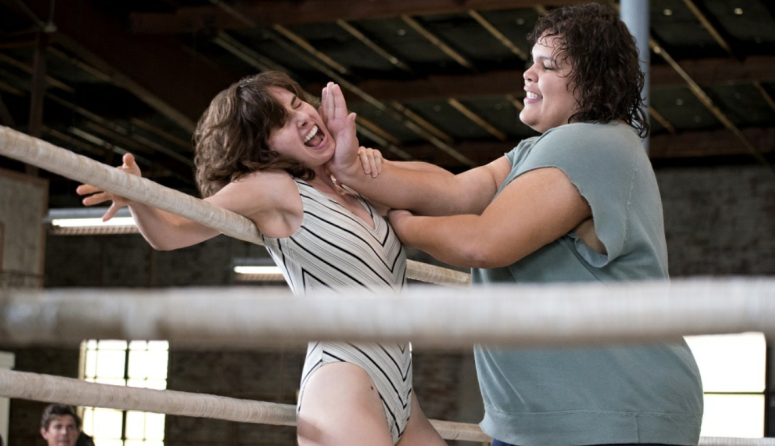 GLOW takes too long to truly come to life and often takes itself far too seriously with its soap opera plot threads but is kept afloat by a colourful group of characters and a handful of excellent, fun wrestling scenes.

Having seen the series for a second time, I have to say that I enjoyed it a little bit more. I still think that it’s a bit too soapy at times and certain plot threads are underdeveloped but it definitely didn’t appear as “glum and low-energy” as I first thought and I have to admit that it’s all actually quite uplifting, fun and it’s a great exploration of just how GLOW may have come together in the first place.

I also have to disagree with my earlier point about there not being enough actual wrestling; I realise that the series is all about actresss who don’t have that much experience with wrestling and that in most of those early episdes, they have to necessarily spend a bit of time learning the basics. There are just enough scenes of wrestling throughout the series to satisfy, a lot of them are rousing and fun, and I hope that we get even more in series two – when the girls have had more hands on experience.

The characters are still lovable and supportive but, as mentioned before, a few of them don’t have much to do and I hope that they get to shine more in the second series. The show is also very technically proficient and it’s all really nice to look at.

So a much better experience second time around and for that, I’m going to give it an extra star. Now bring on series two!