Set roughly a decade before the time of Kirk and of the original Enterprise, Star Trek: Discovery takes place at the start of the Federation/Klingon war, which was inadvertently set in motion by Starfleet officer Michael Burnham (Sonequa Martin-Green), a human raised on Vulcan, who mutineed against her captain (Michelle Yeoh) in the hopes of stopping the Klingons before they had a chance to attack. Stripped of rank and sentenced to imprisonment, she is quickly taken aboard the USS Discovery, a prototype vessel under the leadership of Captain Gabriel Lorca (Jason Isaacs), and is asked to help them implement a brand new, untested “spore drive”, a revolutionary way of space travel that could give the Federation a much needed edge in the ongoing war.

The series gets off to a terrific start with its opening two episodes, the “prologue”, as we get to know some of the colourful characters aboard the USS Shenzhou, many of whom get to initially joke around with each other in the best jovial, Trek way, and we are treated to some mightily impressive visuals and an exciting and imaginative story, complete with stellar writing that is impressively thoughtful, meaningful and actually about something. We have the best of the series here as Sonequa Martin-Green and Michelle Yeoh prove to be confident and commanding leads, playing two excellent characters whose interaction and development is handled brilliantly, the battle scenes (particularly in that epic second episode) are exciting and in a nutshell, the opening stays true to classic Trek (as well as feeling eerily similar to 2009’s Star Trek) while forging its own unique path, not taking itself too seriously and promising a new series that will be a sight to behold.

Things briefly take a bit of a downward turn in the third episode though as it takes a little bit of time to adjust to the Discovery crew, many of whom initially seem a bit too unlikeable, mostly because they give the cold shoulder to Burnham because of her attempted mutiny. And the main problem in this third episode is Anthony Rapp as Lt. Stamets; he initially appears far too snarky and catty, making those cutting remarks directed at Burnham, and at this point, I predicted that I would end up loathing this unprofessional character. In addition, the storyline hits a bit of a bump as it is a little bit of a task to adjust to the new story direction and the new ship, having developed too much of an affection to the USS Shenzhou and her crew. Plus, the third episode goes all Alien – not an original direction to go!

Thankfully though, things soon get back on track and from episode four right up until the mid-season break, the series confidently hits its stride as the characters become much more bearable (including Anthony Rapp, who becomes a fine addition to the series) and the series gets to experiment with many different kinds of classic Trek storyline (time loops, away missions, mirror universes), staying true to what’s come before but successfully modernising it as well. Personally, I prefer the “episodic” collection of episodes more than those which are merely chapters of one big storyline, like the ones at the end of the series. However, after the mid-season break, the series gets a little bumpy as the writing becomes a little less confident and a bit more confusing (especially with the at-times incomprehensible Tyler storyline and the troublesome, logic-defying final episodes) and the many twists and turns are thrown in just for the sake of it; it’s towards the end of the series where things just get too ambitious and it all backfires slightly because the series ends up becoming too serious, muddled and just not as exciting as the first half of the series.

Regarding the cast, they’re a very impressive bunch, worthy of being part of the Star Trek legacy, as all of them give passionate performances, despite the occasionally rocky plotlines. At the forefront, Sonequa Martin-Green is excellent as Michael Burnham, a brave and intelligent officer who goes on quite the character journey throughout the series – going from a flawed and slightly arrogant hotshot soldier (reminding me so much of Assassin’s Creed‘s Altair in those opening two episodes, given her arrogance leading to her demotion) to learning how to work as part of her crew – her Starfleet family. Martin-Green successfully manages to be tough and ferocious while also having that necessary humanity, compassion and honour that is crucial in a role like this. Plus, she masters the “Vulcan eyebrow raise” in an early episode!

Then there’s the great Jason Isaacs who plays Gabriel Lorca, the most “morally flexible” captain yet, and Isaacs throws himself into the role very well, being a tough, authoritative and battle-hardened presence who could easily lead his troops into battle; he also lets loose with a very different side of his character towards the very end, having a blast while doing so. There’s also Guillermo del Toro regular Doug Jones who plays Discovery’s Kelpian second in command Saru, a brand new race created for the series; his people are hardwired to sense and run from danger but Saru gradually learns what it takes to command a starship and grows in confidence as he becomes a stoic, trustworthy figure and he develops a better relationship with Burnham, the two of them initially being at loggerheads.

Mary Wiseman is also good as Cadet Tilly, getting to deliver some heart and some comedic moments (as well as Star Trek‘s very first f-bomb!), the unfairly handsome Shazad Latif shares some great chemistry with Sonequa Martin-Green in his role of Lt. Ash Tyler (though his storyline is the most confusing and muddled part of the series), Rainn Wilson is a particular highlight as a brand new version of the irascible Harry Mudd, James Frain is a surprisingly excellent Sarek (surprising because his involvement in Gotham was less than stellar), and Michelle Yeoh is particularly amazing and very well placed in the first couple of episodes as Burnham’s close friend and mentor Captain Georgiou.

And as mentioned before, the series visuals and production design is truly enviable, worthy of a big screen production, as everything looks perfect and the special effects hold up very well; Jeff Russo’s music is also right on the money.

To sum up, the majority of this new Star Trek series is exemplary due to its great characters, strong cast, amazing visuals and many imaginative storylines. It’s just a shame that it drops the ball a lot towards the end, particularly in the final two episodes, as the writing becomes muddled, confusing and just a little bit too dull – almost as if there were too many ideas floating around and the “committee” couldn’t decide on a clear path. Still, this series finished with more hits than misses (can’t forget that excellent streak in the first half of the series) and the showrunners have done a superb job in bringing us a brand new Trek for this decade. 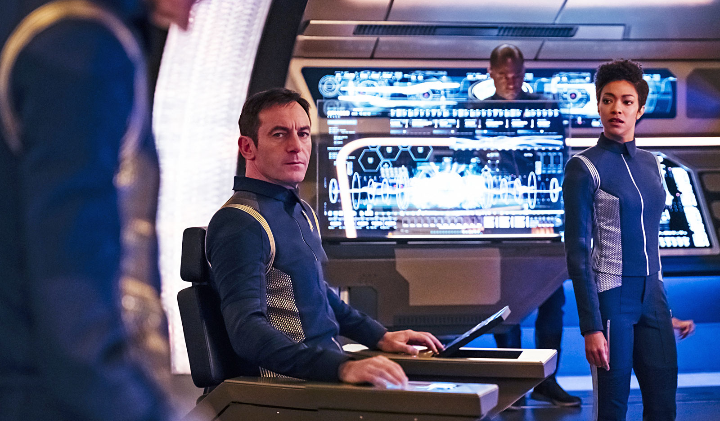 Bolstered by a terrific run of excellent episodes at the beginning of the series but let down by some muddled and disappointing ones towards the end, Star Trek: Discovery is ultimately more hit than miss and showcases plenty of great characters, awesome visuals and an all round brilliant cast.