In 1960s Baltimore, the lonely and mute Elisa (Sally Hawkins) works as a cleaner in a government lab and soon discovers that they have recently acquired a new “asset”, an amphibious creature discovered in South America, that may give them an edge in the ongoing Cold War. Elisa quickly forms a special bond with the creature but when she learns that the government plans on dissecting it, she, along with her friends Zelda and Giles (Octavia Spencer and Richard Jenkins), makes plans to rescue the creature that she loves from captivity, away from the harsh treatment of the ruthless Colonel Strickland (Michael Shannon).

Right at the heart of the story, Sally Hawkins is ideally cast as the lonely, mute Elisa; effectively managing to convey all the necessary emotions purely by facial expressions, eye movements and body language (as well as a fair helping of sign language), she truly proves to be a luminous and inherently likeable screen presence, channelling plenty of sweetness, humour and childlike naivety and wonder while also showing genuine sadness and fierce determination when required. Del Toro wrote the film with no other actresses in mind, believing Hawkins to have a “luminosity, a beauty, almost magical, ethereal” and looking at her unshowy performance (influenced by several silent movie stars – which clearly shows throughout, often to a humorous, heartwarming extent), it’s clear that his casting judgement was completely on the money. Indeed, a luminous being is she. .

Alongside, there’s del Toro regular, and now Star Trek: Discovery main cast member, Doug Jones who is clearly in his element playing the “intricate and beautiful” amphibian man, aided by some flawless and visually stunning creature design; Jones has already proved himself to be the master of playing creatures like this and in The Shape of Water, he effectively lets us know exactly what his creature is feeling through expert body language, showing plenty of animalistic behaviour as well as some recognisable human emotions. Next, the always great Octavia Spencer works well with the role of Elisa’s close friend and “translator” Zelda, helping out a great deal and providing most of the film’s humour – a role like this is well inside Spencer’s wheelhouse and she is a bona fide asset to the film. Also, Richard Jenkins, with his kind face and dulcet toned voice, is a sheer delight as Elisa’s closeted neighbour and best friend Giles, helping out a great deal with Elisa’s “mission” and providing several warmly funny moments throughout, overall being an incredibly supportive and inherently likeable character.

And then there’s ol’ mad-eyed, stone-faced Michael Shannon who plays the villain of the piece brilliantly as only he knows how, managing to appear incredibly ruthless, intimidating and often creepy, especially when he takes special notice of Hawkins’ Elisa. I mean, just the way he constantly, sloooowly crunches those hard sweets is more than enough to convey creepiness – because surely, you can’t sloooowly crunch a hard sweet and NOT appear sinister!

As can be expected from Guillermo del Toro, his latest film is “a fairy tale for adults”, much like Pan’s Labyrinth, and all of these elements are presented beautifully in this film; the opening sequence brilliantly brings in that sense of fantasy and wonder and in addition, The Shape of Water is also something of a love letter to classic cinema, which gives the film a timeless quality, there’s certain mythological influences, and parts of the film also play out like a Cold War thriller. Through all of this, The Shape of Water seems to defy genre, infusing the narrative with drama, warm humour, brutal horror and sensuous romance, and all of the differing themes and influences are ably balanced by del Toro’s passionate, imaginative direction.

On the design front, The Shape of Water really excels and the incredible production design allows you to truly get lost and fully immersed in this fully lived-in onscreen world. Despite being set during the Cold War, the film doesn’t fall into the trap of looking dull and del Toro and co. manage to use colour perfectly, making extra special use of green, teal and lime – seen pretty much everywhere in the clothing, the water, the vehicles and the props. And accompanying all of this is a wonderful score by Alexandre Desplat who is continuing to prove that he can do no wrong these days (especially since I watched The Light Between Oceans just recently and his score for that film was just phenomenal); his music is spellbinding, often creating that fairy tale/fantasy theme and contributing a great deal in making The Shape of Water a work of real beauty – I’ve said before that Dunkirk deserves an academy award for music but if The Shape of Water won, why that’d be great as well. The era-specific tracks also work very well too, especially a certain Carmen Miranda song that’s heard roughly halfway through. 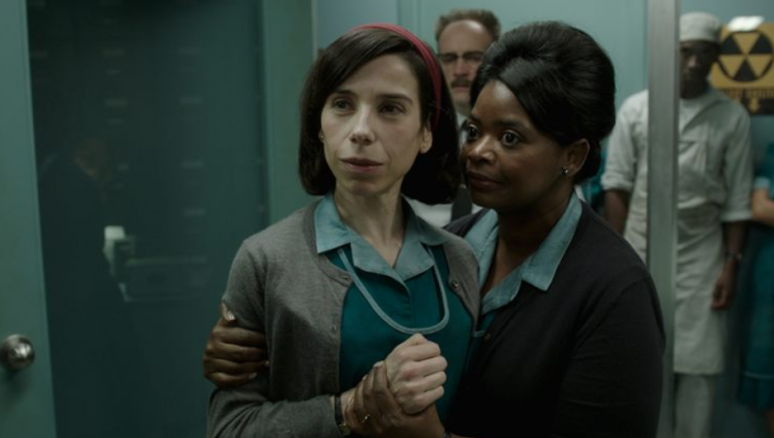 Wonderful performances, exemplary production design, excellent music and a passionate, imaginative story. A beautiful, magical experience and a clear labour of love from all involved.