Businesswoman Sawyer Valentini (Claire Foy) tries to make a new life for herself in Boston, having previously been the victim of an obsessive stalker (Joshua Leonard), but while she struggles to get on with her life, she still sees her stalker everywhere. So she attends a consultation at a behavioural centre but after filling out a few routine forms, she finds herself unable to leave and is told that by signing the forms, she has inadvertently agreed to a 24 hour voluntary commitment and as she desperately tries to escape her predicament, her sanity is soon brought into question, the powers that be extending her “sentence”, but most worryingly of all, she becomes convinced that her stalker is working as an orderly inside the institute.

Right at the centre of this film is the leading performance from Claire Foy and it’s a powerful one indeed. Appearing in nearly every scene, with the camera constantly close to her face, she proves to be a commanding screen presence and believably shows us a character who may very well be slowly losing her mind but at the same time, she displays plenty of determination, frustration, despair and often a sense of cunning as she does whatever she can to make herself appear level headed and sane. What’s interesting is that the character of Sawyer Valentini (a far too sophisticated name for a film of this nature!) isn’t a typical horror/thriller victim, an innocent figure that gets put through hell who we all feel sorry for and support, but instead she’s not exactly the most likeable of people as she has a prickly, standoffish and cold demeanour who makes some bad choices and has a tendency to alienate everyone around her – even she would be the first to admit that she’s a bit of a bitch. This is an interesting direction for the film to take and it actually pays off as it makes Sawyer more realistic and quintessentially human but most importantly, despite her flaws, Foy is never unbearable and it’s still easy to support her throughout her ordeal as she tries to escape the deranged devotion of her stalker and, right at the beginning, the unwanted chauvinistic advances of her boss; Foy goes through the ringer in this film, and her performance is perfectly pitched, dedicated, and admirably compelling.

The rest of the cast is excellent as well. In particular, Joshua Leonard is very scary and menacing as Sawyer’s obsessed stalker, matching Foy in their gripping tête-à-tête moments, Jay Pharoah is incredibly likeable as supportive fellow patient Nate and Juno Temple is wickedly unhinged as the unpredictable patient Violet, though she ultimately ends up as a plot device and could have used some more character development, rather than just being “the random crazy girl”.

Much like Sean Baker’s Tangerine, Unsane was filmed with an iPhone on a relatively meagre budget of around $1.2 million and while this different filming technique can initially be a little jarring to experience, it’s hardly noticeable before long and the visual quality of this film is as crisp and as effective as if it were shot in a conventional manner. Many of the scenes involve characters talking either directly at the audience or towards another character behind where the camera would be, often appearing as though the scene is being shot through a webcam or some such and elsewhere, the camera is often put right up close to the characters and this goes a long way in creating a very claustrophobic and uncomfortable atmosphere, getting us to share in Sawyer’s frustration and increasing paranoia. There’s also an effectively delirious scene where Foy is captured simultaneously from the front and back (maybe reminiscent of Requiem for a Dream) and there’s a couple of scenes that take place in a wood at night, shot with an unsettling blue filter that gives the film another unique touch. All in all, the cinematography and general look of the film is just as good as any mainstream film and it just goes to show what you can create with relatively limited technology.

The story of Unsane is solid enough as it proves to be gripping thriller with a unique premise – a film about everyday woman unwittingly volunteering for commitment in an institution having not read the fine print on the supposedly standard privacy forms, something that could worryingly occur in real life, and it also explores the possibility of these institutions knowingly committing sane people for profit – getting the insurance companies to pay until the cover runs out, at which point the patient is conveniently “cured”; it’s a scary thought and probably a bit far fetched but nonetheless, it’s an intriguing plot point.

All of that makes up the first half of the film and afterwards, it goes deeper into horror/thriller territory when it appears that Sawyer’s stalker has infiltrated the hospital and there’s the big question of whether that’s true or whether she’s just losing her mind, seeing as how she wasn’t exactly all there to begin with. This is all brought to life very well and it’s in this third act where the film hits its stride; it’s very tense, brutal and unpredictable and though it may not exactly be remembered as a classic of the genre, Unsane‘s thriller moments provide plenty of very decent cinema entertainment.

Regarding the shortcomings of the film, I’d say that Unsane takes its sweet time to get going and that most of the first half is too slow, restrained and unimpactful, not delivering any truly exciting moments until much later in the film, and the film’s very last scene is rushed and is derivative of the ending of Misery. It does have really short closing credits though, so that’s really nice to see. As for Soderbergh’s direction, it’s certainly brave and creative of him to choose to film on an iPhone but beyond that, his direction is still nothing extra special and I still believe him to be an unremarkable filmmaker, injecting little to no personality or character into his films – something I feel about Ridley Scott as well since he’s been lucky enough to work with great material but as a director, he’s pretty bland. Because Unsane is a great thriller, no question, but it doesn’t have quite enough personality or character to compete with other films in the genre.

But hey, at least this film is a helluva lot better than Soderbergh’s Logan Lucky. I still can’t get over how disappointing that one was . . . 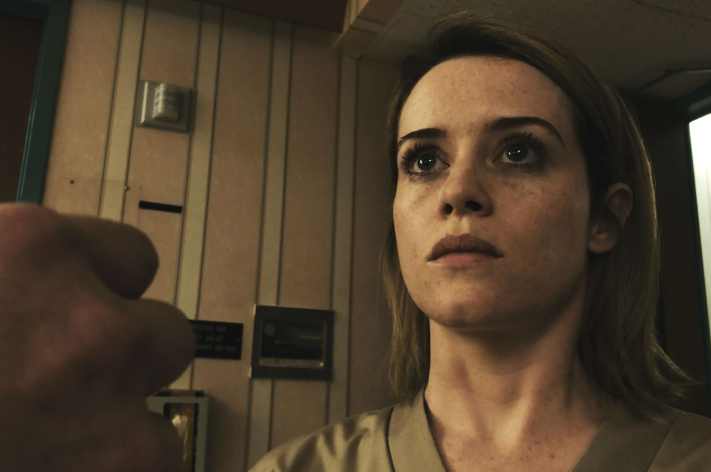 A little slow moving and uncertain to begin with but Unsane ultimately proves to be a tense and chilling psychological thriller with a powerful performance from Claire Foy.