Long ago, we heard the news of an upcoming Big Bang Theory spinoff which would be all about Sheldon Cooper’s childhood in Texas and it was to be called Young Sheldon. Well, reading about this news on Twitter led me, and many others I’m sure, to scoff with hauty derision at such a pointless and lame idea. A Big Bang spinoff about Sheldon? And you called it Young Sheldon? Yeah, good luck with that. Pfft.

But who would’ve ever guessed that the show would go on to be . . . really great?!

As I mentioned, Young Sheldon is about the gifted but difficult nine year old Sheldon Cooper (Iain Armitage) as he grows up in Medford, Texas, attending high school at a very young age; the show also looks at the relationship with his family: mother Mary (Zoe Perry), father George (Lance Barber), brother Georgie (Montana Jordan), twin sister Missy (Raegan Revord) and his “Mee-Maw” Connie (Annie Potts) as well as various friends, neighbours and MANY disgruntled teachers.

What Young Sheldon does so right is that it crucially manages to be consistently funny, without using a studio audience or laugh track, but perhaps unexpectedly, it has a great amount of genuine heart and soul and several encounters with members of his family are just so touching and affecting, never manipulative or fake, and often using Jim Parsons’ narration to occasionally drop in certain facts such as the knowledge that his father will die one day. It’s also clever when it incorporates themes and plot elements from The Big Bang Theory, moments where we get to see the origins of Sheldon’s love of comic books, his germ-phobia and his proficiency with drawing up contracts, among other things; through this, we see that Young Sheldon never forgets its parent show and the way in which the familiar “bits” from Sheldon’s life is very nicely done.

Of course it also helps that the show has a good cast. In the title role, young Iain Armtitage is indeed a “mighty little man” as the confident but awkward lil’ genius, getting a few of Jim Parsons’ mannerisms down but still making the character his own; he’s never insufferable, there are plenty of moments when we feel for him and he’s pretty darn funny as well. As for the rest of the family, Lance Barber is perfectly affable as the long-suffering patriarch George, trying to live a normal life of beer and sport but always having Sheldon, Mary and Connie to deal with, and both Montana Jordan and Raegan Revord are good as siblings Georgie and Missy – having only seen and heard about the older characters briefly in The Big Bang Theory, this show is an opportunity to really explore their characters further.

But two characters in this series shine brighter than the others: Mary and Connie. As the young genius’ mother, Zoe Perry immediately makes a sizeable impact as she perfectly captures Laurie Metcalf’s speech cadences and mannerisms (Zoe Perry is Laurie Metcalf’s daughter, after all) and her character is wonderful – often getting exasperated at Sheldon’s behaviour as well as venting her frustration and unabashed opinions to various teachers and neighbours but ultimately loving Sheldon and her family a great deal, showing genuine maternal warmth and softness.

And then there’s the great Annie Potts as Sheldon’s indomitable Mee-Maw (who, as we know from Big Bang Theory, is a major part of his life); she’s quick witted and clever – a real character – and it’s especially fun to watch her and George playfully bounce insults off each other, seeing her winding the straight-laced Mary up all the time, and the close relationship that we see with her and Sheldon often provide the very best moments of the show. Potts is the clear MVP of Young Sheldon as she plays the irascible and mischievous Connie brilliantly with genuine warmth and humour.

So that’s about it. What may have seemed like a soulless cash grab once upon a time actually turned out to be a consistently funny and unexpectedly moving series, putting its parent show to shame. Although this is the first, freshest season and The Big Bang Theory just finished its eleventh so maybe it’s unfair to compare . . . 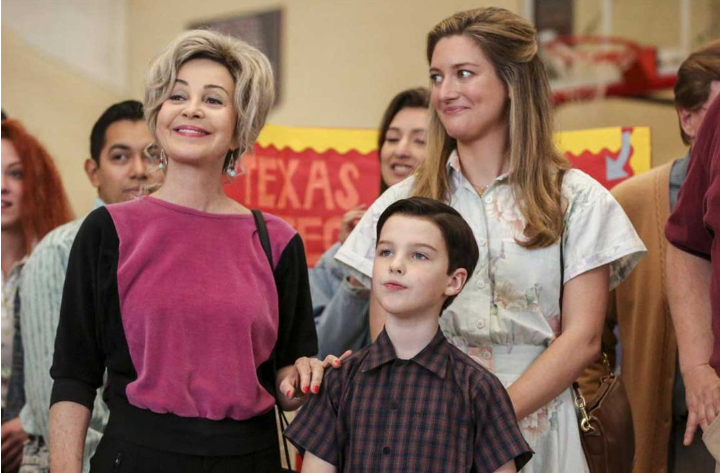