The third reimagining of William Wellman’s original 1937 film about the rise of one star and the fall of another, director Bradley Cooper’s 2018 version of A Star is Born features Cooper as Jackson Maine, an alcoholic rock star who meets Ally (Lady Gaga), an insecure aspiring songwriter and performer with a mightily impressive voice, in a bar one night. The two of them begin a relationship and after Jackson persuades Ally to sing one of her own compositions at one of his live shows, Ally’s career soon takes off as she goes on tour with Jackson and the two of them fall in love. But when Ally’s skyrocketing career leaves Jackson in the shadows, fuelling a further descent into alcoholism, the two star crossed lovers face a massive strain on their relationship and must struggle desperately to keep it alive.

Taking on the role of popular musician Jackson Maine, Bradley Cooper is ideally cast as he is suitably charismatic and believable as a well renowned rock star, having a powerful stage presence and showing off a lovely singing voice and guitar playing skills, talents which he dilligently worked on in preparation for the film. Outside the music, he shows genuine awe, protectiveness and compassion towards Ally, being a strong mentor and believably showing inner turmoil when she embarks on a new path, and in the moments when his character goes off the deep end with alcohol, he’s never a caricaturish drunk (though his speech is perhaps a bit too slur-y) and overall, he convinces as both a romantic lead and a pained fading star whose life is in turmoil.

And as the pivotal star of the show, Lady Gaga is equally impressive (in her “first” film) as Ally, starting off as an insecure young woman with a hidden gift, only managing to express herself through performances at drag bars, later growing in confidence as she embraces her talent and rises to stardom. Lady Gaga is grounded enough and displays plenty of heart in the role, not showing too much ego or overconfidence, and like Cooper, she’s ideal as a romantic lead since there’s never any doubt as to how she feels about Jackson and the two of them have solid chemistry. And of course, she has that powerful voice and greatly impresses during her performances, especially in her early rendition of “La Vie en Rose”.

The only thing is that, as an important part of the film, we’re supposed to accept that despite her amazing voice, people can’t get over how odd, different and “unattractive” she looks but for me, this was hard to buy into because in her “natural” state, she’s actually beautiful. It’s all a matter of taste though, I guess, and I realise that the music industry (including the one portrayed in this film) has an unrealistic, superficial standard of beauty these days – more on that later. But I’m with Jackson – Ally does have a beautiful nose!

A Star is Born is an effective remake and modernisation of the classic tale of one star rising and another one falling (which we’ve also seen in films like The Artist) and it remains faithful to the original incarnation by keeping the basic plot, with all the important story moments and Maine’s very important repeated line, while effectively putting it all into a modern love story that today’s audiences will surely enjoy. This particular version does a very good job in conveying how important it is to have a message in your music and how incredible it is that certain talented people can make magic out of the same old notes, baring their souls in the process. The film is also a very strong modern love story and through its confident script, commited performances and dialogue that hits the right notes (ha!), the film may very well prove itself to be a future classic in the genre.

As mentioned before, this version of A Star is Born would also appear to be about the state of today’s music industry – a business that has lost much originality and soul, instead favouring hollow cover versions, generic, mechanized music with no message, over-the-top choreographed routines, and a fake, unrealistic standard of beauty which shuns the truly beautiful and gifted. This point hits home during Ally’s performance on Saturday Night Live (a scene in the movie that has a similar intention as one in La La Land) and moments like this adeptly show the film’s message about mediocrity in today’s music business and how, sadly, maybe it is really “time to let the old ways die”.

In his directorial debut, Bradley Cooper demonstrates a lot of promise as he directs A Star is Born very well indeed. He manages to maintain a very steady pace, never letting the interest dip for too long, he effectively juggles many different moods (humour, romance, drama, conflict, tragedy) and he gets the best out of his actors. He also knows just when to use handheld camerawork and when he chooses to do this, during the kinetic live performances, he gives the film a sort of “rockumentary” feel, capturing the spectacle and the power of live music and making it seem as though we’re behind the scenes on an exciting music tour. Of course, when events get more serious and the drama unfolds, the camera “slows down” as it takes time to capture the characters’ emotions and in the moments when Jackson has had too much to drink, the camera gets in close and establishes a claustrophobic, almost nightmarish, feeling.

And of course, the music and the soundtrack is very impressive indeed; the already much-talked-about “Shallow” will surely garner some Oscar buzz and overall, the music is lovely to listen to – brought to life by the powerful voices of Bradley Cooper and Lady Gaga. 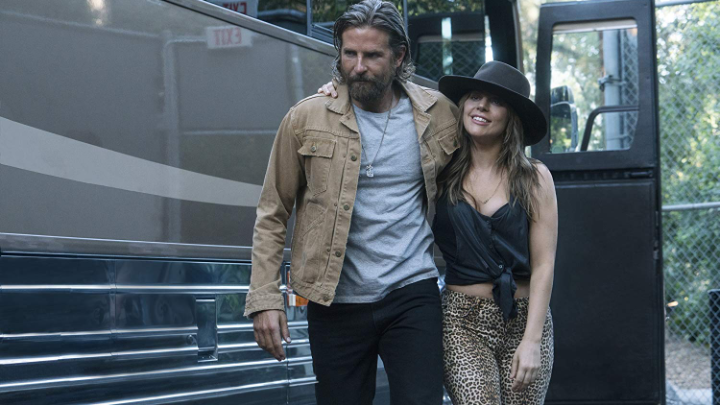 A very effective adaptation and modernisation of a classic tale, A Star is Born is a powerful love story with a solid and thoughtful script, stirring music, and two strong performances.