To begin with, I wasn’t a fan of McKay’s The Big Short; I know that it garnered a lot of praise and that it told of an apparently important part of American history in innovative and inventive ways but honestly, though it had some merit, I found it quite boring. But the examination of the life of notoriously infamous politician Dick Chaney (who I was certainly aware of by reputation but otherwise didn’t know too much about) is far more interesting subject matter than the collapse if the US housing market to me and the knowledge that this particular film has already proven particularly divisive made me quite curious to see it, to see where I stood.

In the end, I enjoyed this film far more than The Big Short and although it has its problems, I would place myself in the positive camp. I certainly don’t see it as the dumpster fire that some are making it out to be.

Looking at the film’s merits, Vice always manages to have something interesting to say (even with a seemingly long runtime) and through a great deal of imaginative directorial tricks and techniques, a potentially stale biopic manages to be sufficiently entertaining and engrossing, telling of the big events in several innovative ways that will hook the average cinemagoer and hold their interest. Much like with The Big Short, all the confusing terminology is partially explained through fourth wall breaking narrators and visual imagery, and techniques like split screens, a Shakespearean segment, a restaurant cameo, and a jarring false ending go a long way in keeping things as entertaining as possible.

The film also has a commited cast and they all relish the chance to sink their teeth into these grotesque characters. As “the Vice”, Christian Bale delivers another strong, worthy performance and he often appears intimidating and quietly monstrous as Chaney, putting on his ol’ Batman growly voice and yet again putting on weight (45lbs) to truly transform into the character; it’s a largely physical performance as he lets the bulkiness of the character do the talking but there are also certain slower moments where he shows a little conflict (not too much, mind you!) and he achieves this through some well rehearsed facial expressions. All in all, Bale truly inhabits the character and is a big asset to the film.

Amy Adams is equally as good as Lynne Chaney and rather than standing in the background, she gets fully involved in her husband’s business and proves herself to be just as cold, ruthless, heartless and nasty as Dick as they both take no prisoners and they bathe in their success as they Underwood their way to the top. Steve Carrell is also brilliantly slimy and devious as the scheming Donald Rumsfeld (his first scene is better than the entirety of Beautiful Boy!), Tyler Perry is the spitting image of Colin Powell, and Sam Rockwell excels in his role of George W. Bush, showing him to be a bit of a dupe – a “green” personality who’s out of his depth and unwittingly used and abused by Chaney and co.

On the flip side though, Vice is unashamedly biased, the opening sequences appearing uncannily like something out of a Michael Moore documentary (narrator Jesse Plemons does sound like him), so rather than painting a complex character portrait or attempting to create a meaningful film that delves into the heart of such a man, Vice always makes its one-sided agenda clear, painting the characters as one-note monsters, and the writing, though sometimes clever and funny, is heavy handed and constantly “in your face” – telling rather than suggesting.

The film also crams a heck of a lot into its runtime and aims to tell as many chapters of Cheney’s life story as possible, jumping around all over his timeline – from an incredibly brief minute or two from when he was a “party boy” and then quickly getting stuck into his various political posts without ever taking time to slow down and let the audience understand just who he is or what his job is supposed to be. Due to the entertaining nature of the film and the brisk pace, Vice is certainly easier to enjoy than something like The Big Short but the film does slow to a crawl around two thirds of the way in and as it runs out of steam and covers familiar ground, audiences may be left wishing for the film to end as it seems to go on for longer than necessary. 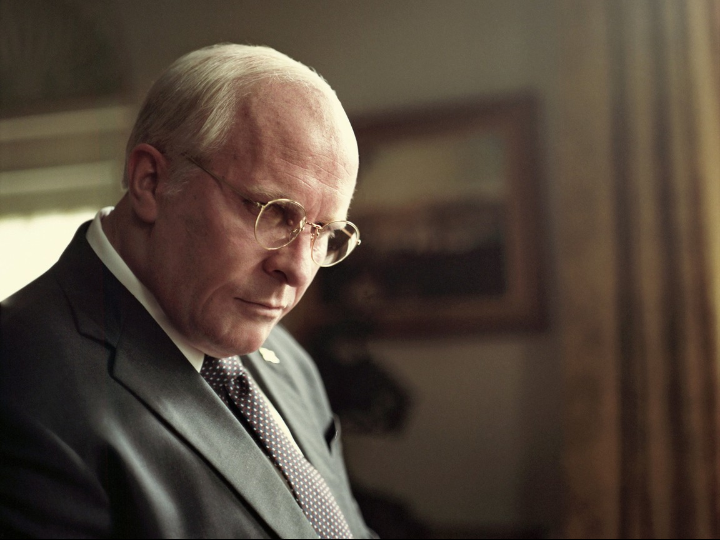 An entertaining and engrossing, though incredibly biased, heavy handed and messy, political odyssey with inventive direction and a commited cast.