In Norwich, siblings Soraya (Florence Pugh) and Zak (Jack Lowden) Knight help run a local wrestling program while dreaming of fulfilling their childhood dream – of one day joining the big leagues of the WWE. When they receive a call from trainer Hutch Morgan (Vince Vaughn), inviting them to participate in tryouts, their dream looks to finally be within their grasp but when Soraya (later taking the wrestling name Paige) is chosen but Zak isn’t, the former goes off to Florida and struggles with the intense training and with connecting with everyone else, while the latter is utterly distraught and spirals into increasingly self-destructive behaviour. So with a childhood dream on the line, and with the hopes of her family riding on her, can Soraya make it through the gruelling ordeal and can the tight knit family manage to stay together?

To start off with perhaps the biggest flaw of the film (and one which immediately answers the question above), Fighting with My Family is very conventional and as a bona fide underdog story with many of the associated tropes that you can check off as the film progresses, it offers few surprises and plays everything very safely. In this film, we have our enthusiastic and relatable sports star with a dream, there’s a metaphorical mountain to climb, there’s family drama at home, she struggles with her identity and she’s helped by an understanding coach, her supportive parents and a celebrity cameo (you know who), all offering pearls of wisdom and motivational talks as she moves into the final, climactic, it’s-all-come-down-to-this battle. Plus, there’s the inescapable Rocky inspired montage, set to “Takin’ Care of Business”, the closing “what happened next” text, and some documentary footage showing the real people involved. With the amount of heart the film has (more on that below), Fighting with My Family is still a jovial and lighthearted affair but it also can’t escape being fairly predictable; it isn’t a particularly exciting or memorable outing and though its intentions are pure, it doesn’t break enough new ground and runs the risk of being forgotten about by this time next year.

But what Fighting with My Family does have going for it is its heart and commitment that the cast and crew demonstrate in bringing the story of this unconventional but lovely family to a mainstream audience. Though not exactly Oscar calibre, Stephen Merchant’s writing is heartfelt and humorous and his script is more than capable of coaxing a few genuine smiles and chuckles out of the audience while also effectively giving us credible characters who go through legitimately troubling times; the family conflict forms the backbone of the film’s drama and it’s here where the film shines brightest as it’s the most engrossing part of the film and the cast members involved really sell it.

It also manages to be perfectly accessible to people who maybe aren’t familiar with the world of TV wrestling. Myself, I’d say that I have a basic knowledge of the sport as I spent quite a bit of time playing War Zone and Smackdown 2 on my PS1 back in the day, learning about many of the famous wrestlers, getting one or two action figures and occasionally seeing matches on TV. Back when it was WWF, I believe! But that was a while ago and I’m probably a relative newbie when it comes to the subject but Fighting with My Family still works for people who don’t know about wrestling and there isn’t too much confusing terminology to conquer, no inside jokes that only the avid watchers will appreciate (I’m guessing). But apparently, some die-hard wrestling fans have expressed a certain amount of disappointment with the film since Paige’s progression into the big leagues isn’t depicted accurately as she and her family wrestled all over the country and, rather than being a complete unknown by the time the final match occurred, people really did know who she was and she already had plenty of fans by the time of the final pivotal match.

The film’s cast is utterly lovely and all go a long way in making Fighting with My Family an ultimately pleasant experience. In the leading role, Florence Pugh (who was, of course, the main reason why I went to see this film in the first place – Pugh being one of my favourite actresses who I’ll watch in anything) demonstrates plenty of commitment to the physical side of things – engaging with the wrestling scenes with vigor and skill – as well as clearly showing Paige’s determination and spirit as well as her insecurity and sadness when she’s away from her family. Alongside, Jack Lowden gives a great supporting performance as Zak, believably going off the deep end as he loses hope and slides into increasingly erratic and unpredictable behaviour, and both Nick Frost and Lena Headey are absolutely brilliant as the parents – Frost’s Ricky is the tough and brash but also fiercely supportive and caring family patriarch while Headey is the concerned mother with a troubled past who loves her family and is particularly proud of her daughter Soraya. Finally, Vince Vaughn gives a decent dramatic turn as promoter Hutch Morgan and Dwayne “The Rock” Johnson provides the biggest laughs in his extended cameo playing himself – most of which you’ll have already seen in the trailer. 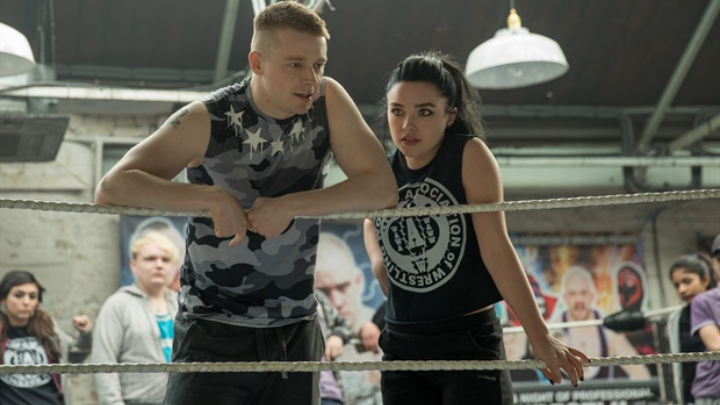 A conventional underdog story that offers few surprises but it succeeds due to its heart, gentle humour and lovely cast.