On the 16th of March 2019, I probably should have done my patriotic duty by watching my home country win the Grand Slam at the Six Nations but instead, I decided to spend the day catching up with a bunch of films on Netflix and now that I’ve seen them, I thought it would be a good idea to briefly review all of them in one post, talking somewhat informally about them and not stressing so much about doing several “proper” full length reviews. Should be fun!

Chiwetel Ejiofor’s directorial debut arrived on the streaming service with little fanfare but considering the dedicated effort that was put into the picture, it should have been marketed a little bit better. Having also penned the screenplay, Ejiofor’s film is about a village in Malawi that goes through a terrible food crisis, following damaging floods and the subsequent drying up of the land, and as the central family struggles for food and money, with what little they have soon stolen by desperate starving villagers, young William (Maxwell Simba) reads a book in the school library and comes up with a clever idea of using wind power to generate electricity and provide water for growing food.

As mentioned before, a lot of effort went in to making this film and for helming such a passionate project, Chiwetel Ejiofor deserves a fair amount of praise; he directs very well as he knows how to capture the vital emotions, he directs he actors well and he utilises Dick Pope’s beautiful cinematography splendidly. His well-intentioned screenplay is coherent and the story itself is an important one, at its best when we see the food crisis get worse and the townspeople getting angry and desperate, creating a palpable sense of gripping drama and tension.

However, TBWHTW is a little too long and the pacing is too patient and leisurely for its own good; there appear to be stretches where not much actually happens and the pivotal “harnessing of the wind” comes into play too late in the game.

Still, Joseph Marcell from Fresh Prince is in it, so that’s cool! 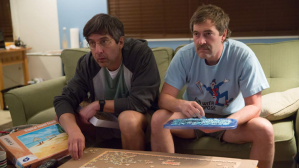 An intimate character piece much like Blue Jay (which I enjoyed), this new film is about neighbours and best friends Michael and Andy. When the former is diagnosed with incurable cancer, he decides to end his life and gets an initially reluctant Andy to help him do it.

Following on from The Big Sick, this is another opportunity for Ray Romano to excel in a more dramatic role (with comedy added in) and here, excel is what he does. He and Mark Duplass perform brilliantly in this film, giving us credible and fully supportable characters who clearly have a great bond and they enjoy spending time together watching kung fu movies and discussing puzzling t-shirts. It’s a great film looking at a particular male friendship, one where the two guys really love each other and in this film, they aren’t afraid to admit it.

The film contains an ideal blend of drama and comedy as we truly feel for these characters, getting us on the edge of our seats when they argue and when the time comes for Michael to end it all, but it’s also affectionately funny and it admirably had me laughing out loud at certain points, mainly due to Romano’s wonderful line delivery.

The road trip section of the movie is a delight, it looks good visually and overall, this is a very effective, intimate little film with a good story and two impressive leads. 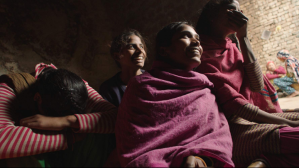 Thankfully much more than “that Oscar winning film about menstruation”, this 25 minute documentary looks at how “that time of the month” is still a misunderstood occurrence, one that causes young girls to giggle, something that young men think is some kind of illness and something that the men of India only pretend to be ignorant of, instead of actually talking about it. The film looks at “The Pad Project” where Indian women go to work manufacturing and selling sanitary pads and then go on to talk about their dreams and ambitions.

The best parts of this short film occur in the second half where it becomes clear that making a living and earning their own money means a lot to these women and the final few scenes do well in creating a feeling of female strength and empowerment, particularly in the patriarchal society that they live in (although the enlightened man who teaches them how to operate the machinery sure is a good example of how men should behave)

The women who participate in this film are a very fun bunch and it’s entertaining to watch them go off and demonstrate how well their products work, jokingly pointing out how they’re superior to other brands despite looking very ugly (comparing them to ugly men – not nice to look at but they get the job done!), and watching them as they sell their wares, one of them who has never sold anything before gradually growing in confidence, is great to witness.

All in all, it’s an enlightening documentary which is great to have when there are so many sexist trolls in the world today. It’s just a shame that it wasn’t a little longer. 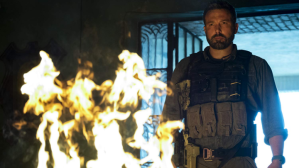 Originally meant to be directed by Kathryn Bigelow and written by her frequent collaborator Mark Boal, J.C. Chandor’s film is about five ex-servicemen who band together to kill an notorious drug lord and rob him of a substantial amount of money.

I wasn’t expecting much at all from this film but I ended up enjoying it quite a bit; if directed by Bigelow, it probably would’ve done a better job in fleshing out the characters and providing a deeper meaning, plus the whole thing could’ve been shortened a little bit, but as an action/adventure film, it provides plenty of engrossing entertainment and I was certainly gripped by it. The pivotal heist is the highlight of the film because the effective direction ensures a palpable sense of tension, excitement and unpredictability and watching the guys uncover walls full of money, all the while against the clock as they await the return of the guards and family members, provides a great film watching experience.

From there, we get more of an adventure story as the guys have to travel a great distance with their bags full of money in order to get to safety, all the while in danger of enemy retaliation, and all of this is set up against some impressively beautuful cinematography, smooth editing and a great soundtrack with songs from Fleetwood Mac, Pantera, Bob Dylan and Creedence Clearwater Revival. Because . . . you know, it’s a war film. Including a CCR song is kind of a rule.

There is also some attempt at characterisation, looking at what the men are willing to do to make off with the money, and the acting from the five leads is good, but overall, Triple Frontier mainly succeeds as an entertaining action/adventure film. 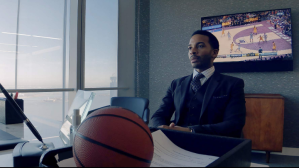 I think that Steven Soderbergh is quite the hit-and-miss director; for every Behind the Candelabra or Unsane, he also gives us a Logan Lucky or a . . . High Flying Bird.

Maybe it’s because this was the last film of my night or maybe there’s actually a problem with the screenplay, but I would have some serious trouble coming up with a coherent synopsis for this story because I had no real clue what was going on and honestly, I had trouble even caring.

I think that it’s a Jerry Maguire type story about an ambitious young agent as he negotiates the cutthroat world of the NBA during a “lockout” (drink every time you hear THAT word – you’ll be drunk by the end), trying to safeguard the career of his promising young client when a rival appears on the scene, instigating some social media conflict. Also, there’s some stuff about his assistant, a rival agent, a big community game and Kyle MacLachlan but all of that blends together into one big confusing and incredibly boring mess.

I think that other reviewers have had the same problem with this film in that if you’re not American or don’t know anything about the business of basketball, then this film may end up being utterly incomprehensible as no real effort is made to explain what’s going on to the layman viewer and it seems to be primarily aimed at those directly in the know; Moonlight‘s Tarell Alvin McCraney is to blame here because his story is really quite dull and his characters aren’t worth caring about.

And while shooting on an iPhone worked remarkably well in Unsane, since it captured a necessary sense of claustrophobia and horror, it is completely misused here as the film can sometimes be quite awkward and uncomfortable to watch visually because the camera angles are often mystifying and a little dizzying – this film should have been shot with conventional equipment. Although the picture quality sure is impressive and there’s a scene towards the end, set in Zachary Quinto’s office, that is lit beautifully.

The acting’s decent and the whole thing looks sleek enough but overall, High Flying Bird is a long, boring, nonsensical slog and I just wanted it to end. I could’ve even turned it off midway and I wouldn’t have missed anything.