Following on from his critically acclaimed, award winning Get Out, writer/director Jordan Peele is back with another horror film, this time about Adelaide and Gabe Wilson (Lupita Nyong’o and Winston Duke) who take their two children to Santa Cruz for a vacation, Adelaide being initially reluctant to do so following a harrowing incident that she experienced there as a child. Having spent the day at the beach with friends Kitty and Josh (Elisabeth Moss and Tim Heidecker), the family is later terrorised by sinister doppelgangers of themselves and as the Wilsons attempt to escape their evil tormentors, they notice the same thing happening across the country and Adelaide realises that the phenomenon could very well be linked to what happened to her as a child. 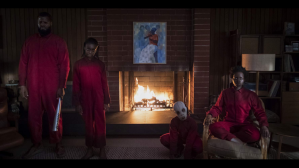 Although it doesn’t quiiiite reach the extremely high benchmark left by the adored Get Out, Us yet again proves that Jordan Peele is a modern horror maestro as his latest film is incredibly creepy, spooky and very unsettling and, like his previous hit, he has thought up a remarkably original, passionate and imaginative story that’s full of colourful characters and it’s one where humour and the use of music is infused into the feature quite brilliantly. This is a man who truly understands horror and his direction is once again incredibly accomplished, even more impressive when you realise that this is only his second film, and he knows exactly what to do to ensure that the onscreen goings on are as tense, unsettling and as engrossing as possible; he gets the very best out of his actors, he makes sure that the right camera angles are used (utilising plenty of disorienting close-ups, both high and low angles, and even some lovely looking landscapes), his use of colour and lighting is ideal for a horror film, and the final battle – almost a dance – is choreographed wonderfully.

He also uses music very wisely, with Michael Abel’s appropriately nerve-shredding script going hand-in-hand with the visual scares and a fine soundtrack that includes the likes of N.W.A., The Beach Boys and Minnie Riperton – the first two are used very effectively in a wonderful, darkly comic scene and the latter is heard during the closing moments.

And while Get Out had something of a message about modern society weaved in to the screenplay, Us is less concerned with being about something and simply exists as an entertaining and enjoyable piece of entertainment, though there will undoubtedly be viewers who see hidden meaning and will come up with numerous theories and suggestions, I’m sure. I mean, that 1986 hall of mirrors had a Native American theme and the rest of the film is about a group of people who have been forgotten about and mistreated, stating “We are Americans”, while the rest of society lives a relatively idyllic and sometimes shallow life above ground. Boom – there’s one interpretation for ya!

But in any case, Peele’s story and screenplay is very accomplished, original and worthy of the big screen treatment, with solid dialogue that integrates humour quite well; it doesn’t try too hard to be funny but, at certain moments, it naturally is and it looks as though Peele’s films are adept at being frightening while also having plenty of welcome humour that fits in at all the right places. The story may not be as memorable as some other horror films out today but thankfully, it never appears generic or stale and the overall story is a fascinating one that reels you in and leaves you desperate to unravel the big mystery. The only problem for me was that it includes one twist too many, featuring one final revelation that most viewers would’ve picked up on very early on in the feature and it’s one that raises a few more questions than it answers.

Headlining the film, Lupita Nyong’o is absolutely amazing in this film and by the end of this year, we’ll surely be remembering her performance as one of the very best of the year; as Adelaide, she’s a haunted soul who sometimes comes across a little uptight and awkward but as the film goes on and she’s pushed to breaking point, she grows ever more determined to fight for her family and she goes on to show her fierce resilience and bravery as she kicks butt all over the place. But it’s as her doppelganger Red where Nyong’o truly shines because, when appearing as this character with her croaky, hoarse and raspy voice, precise facial expressions and her particular way of moving, she is instantly creepy and scary and I can honestly say that hers is one of the most effectively unsettling performances that I’ve seen in a horror film for a good long while.

Alongside, fellow Black Panther star Winston Duke also fits in very nicely as Gabe – he provides most of the comedy within the film and is overall a strong supporting character, all the while not trying to outshine Nyong’o at all – Shahadi Wright Joseph and Evan Alex are impressive as the kids, while Elizabeth Moss and Tim Heidecker are very good as Kitty and Josh – this is definitely a type of role that Moss hasn’t really done before (to my knowledge) and she is particularly effective in her very unsettling role as doppelganger Dahlia. A much better foray into horror than her Mad Men co-star Christina Hendricks, who had the unfortunate luck to be cast in last year’s hilariously awful The Strangers: Prey at Night.

Us is actually quite similar to that film in many respects only this film is . . . competent.

So anyway, Us is yet another very strong feature from the emerging horror maestro; it may not have quite as good a story as his acclaimed debut but it’s refreshingly frightening, masterfully constructed and directed, and Lupita Nyong’o is incredible. If there’s any justice, then this year’s Halloween costume of choice will be a red boiler suit, leather fingerless gloves, sandals and gold scissors. 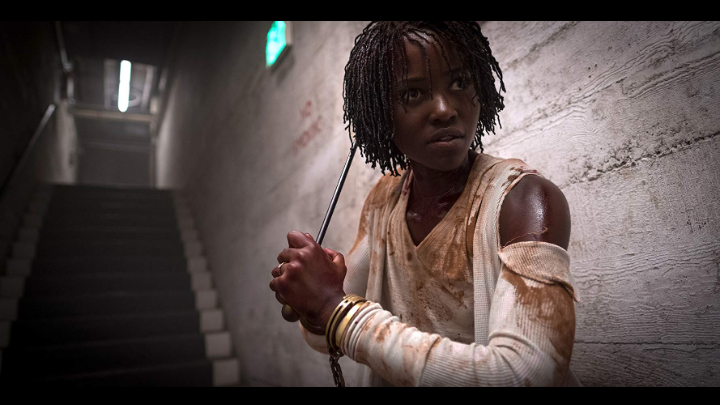