Having been separated from his mother when he was young, 14 year old Billy Batson (Asher Angel) has been taken in by numerous foster families but has always run away from them, determined to track down his real mother and to only look out for himself. Finding himself in a new home, Billy unexpectedly finds himself summoned to a mysterious lair and is given extraordinary powers by an aged wizard (Djimon Hounsou), who has chosen Billy as his champion so that he can prevent the seven deadly sins from being unleashed on the world. Now, by saying the word “Shazam!”, Billy is able to transform into an adult superhero (Zachary Levi) and as he and his foster brother Freddy (Jack Dylan Grazer) have fun experimenting with his amazing abilities and generally messing around, the sinister Thaddeus Sivana (Mark Strong) commits himself to finding “the champion” and to steal his power, since he himself was denied the incredible opportunity when he was a child.

The DCEU has been notoriously shaky in the past, existing in the shadow of its behemoth rival the MCU and generally producing films that haven’t been that good, Wonder Woman being the jewel in its crown. Things seem to be slowly turning around for them now though as Aquaman proved to be a big crowdpleasing moneymaker (though I thought it was quite messy, awkward and far too long) and it seems as though they’re taking some time to make more focused, character driven films that don’t take themselves too seriously. And with Shazam!, this wise change of pace seems to be working in the DCEU’s favour because this film, though not without some problems, is an entertaining time at the cinema and it’s a film with good characters, an energetic leading performance, effective humour and a fun story.

For the most part, in the first half that is, Shazam! indeed appears to be a welcome change of pace from the disappointments of Justice League and Suicide Squad because the script is actually very good because the dialogue works, it’s affectionately funny and has some humorous gags, the main set-up to all the superhero stuff is easy to wrap your head around – it isn’t overly convoluted, messy or confusing – and when dealing with it’s themes of family, these moments work quite well and admirably give the film some much needed heart and makes sure that the film is about something. It’s enjoyable to watch the fun characters discover Shazam’s many powers and the film is also knowingly metatextual and self-aware, the cynical Billy often making fun of all the superhero goings on and throughout, the film pokes fun of several superhero tropes such as monologuing in mid-air when there’s a mile of distance between the hero and villain! Shazam! doesn’t try too hard to tie into the other films either, rather it acknowledges that heroes like Batman, Superman and Aquaman exist in this world and they just make sure that various paraphernalia is shown throughout (like the Batman doll that Billy throws at the villain in a wonderfully unconventional “fight” scene in a toy store!) and they are all lovingly mocked in the Spider-Man: Homecoming style end credits.

That blatant reference to Big was a bit too on-the-nose though.

But Shazam! isn’t perfect and, as with other DC films, it has some problems which hold it back from true greatness. As with Aquaman and a few of the other DC offerings, the film is hindered by a bloated runtime and it seems as if the powers that be, although they’re gradually improving the overall quality of these films, still need to be reigned in and to make their features more compact because Shazam! shouldn’t have been quite as long and in this film, too much time is spent on Billy/Shazam acting irresponsibly, going through arguments with Freddy and his foster parents, and the final battle turns out to be a drawn out, crashy, smashy, punchy, flying through the air fighting CG minions type deal. Also, the special effects in scenes like this are occasionally a bit ropey.

At the forefront, Zachary Levi is great as the adult Shazam and as well as having the ideally buff superhero physique (but how much of that suit was padding?), he convinces as a 14 year old trapped in an adult’s body and brings a likeable, goofy charm to this new superhero; Levi has a lot of fun with the role and ultimately proves to be the ideal casting choice. Asher Angel is also a strong performer as the younger Billy and he is believable as the jaded, standoffish loner who’s determined to look out for himself; we have no trouble in believing that he and Levi play the same character and overall, Angel proves to be a confident co-lead.

Alongside, Jack Dylan Grazer is fun and supportable as Billy’s superhero obsessed friend and mentor, delivering most of the humour and heart when he gets picked on or when he and Billy fall out, the actors who play Billy’s foster family are great, and as the villain of the piece, Mark Strong is ideally nasty and cooly menacing as Sivana; at the start, he appears to be one of the DCEU’s better villains given his credible motivation (anger at his family, bitterness over not being chosen) and Strong shows this very well, never over-the-top or hammy, but as the film goes on, he becomes less interesting and turns into just another stock baddie that just flies around, punches the hero and makes many many threats. But this is Shazam’s first outing so we can’t start with the truly special villains just yet, I suppose . . .

And there is both a mid and a post-credits scene. 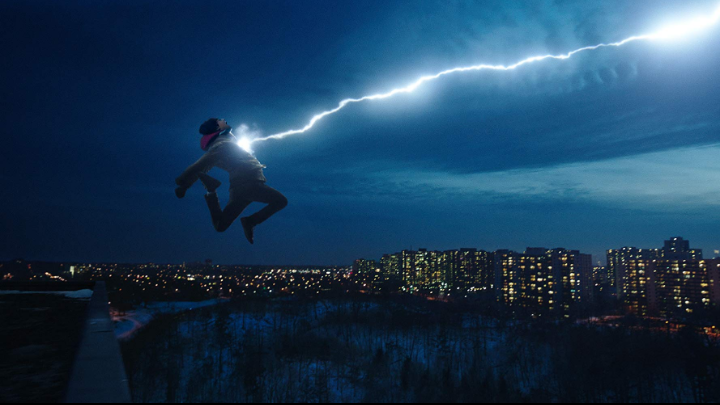 A fun and entertaining adventure with a good script, funny jokes, some meaningful themes and lively performances. Shazam!