Disney’s second live action remake of 2019, Guy Ritchie’s Aladdin tells the tale of how the good hearted Agrabah “street rat” Aladdin (Mena Massoud) finds a magic lamp inside the Cave of Wonders and the all powerful Genie (Will Smith) who grants him three wishes, which he uses to transform himself into Prince Ali Ababwa in order to impress the resplendent Princess Jasmine (Naomi Scott) and to prevent the scheming vizier Jafar (Marwan Kenzari) from seizing power from the sultan.

When I first heard the news that my favourite Disney film would be given the live-action treatment and that it would be directed by Guy Ritchie of King Arthur: Legend of the Sword fame, well, my expectations weren’t exactly sky high. Of the three major Disney remakes of this year, I thought that it had the potential to be the weakest of the three, something that should never have been attempted given the questionable choice of director and the fact that the original Aladdin is such a classic, but every time I saw a new trailer for this new version, I actually grew more hopeful and, given my less than positive response to the new Dumbo and the surprisingly less-than-promising trailer for The Lion King, I had a crazy notion that this could actually be the best of the bunch!

Having now seen it, I can reveal that Ritchie’s Aladdin is certainly not the disaster that it could have been as, overall, it’s somewhat decent, but at the same time, it has problems and the film lacks a feeling of genuine wonder and excitement and at the end of the day, though it may succeed in introducing a “new generation” to this colourful tale, it’s superfluous and should’ve been left alone.

One of the things that struck me most about it was that it doesn’t really do anything new and ends up being too much of a copy of the original, taking the word “remake” a little too seriously, it would seem. Aladdin goes through the plot of the 1992 film more or less step by step and much of the dialogue is directly lifted from that film, so if you’re very familiar with the 90s version, you will know exactly what’s going to happen, what every character will say, what musical numbers are about to happen, and as it moves along, you can just see the filmmakers “ticking the boxes” as they follow the Disney story to a tee.

I’d say that there’s also a fault with Ritchie’s direction because, as he directly adapts the classic story, there’s never really a sense of genuine wonder, passion, grandeur or danger included in the film; memorable locations like the Cave of Wonders or the Sultan’s palace only look alright, not awe-inspiring like they should be, and sequences like Aladdin and Jasmine going on a magic carpet ride or Jafar gaining the powers of the lamp are decent but ultimately throwaway – they don’t stir the necessary emotions and there’s not enough passion or commitment in the direction or the film’s design team.

But then again, much like 2017’s Beauty and the Beast, the film tries to bring in some new material and with Aladdin, certain song lyrics are changed (presumably to accomadate the slight changes in the script and to be more accurate and factual than the original lyrics), attempts are made at fixing plot holes, Jafar is given slightly different motivations involving invading neighbouring kingdoms as well as a new backstory, Genie is given a romantic side story with Jasmine’s handmaid (it’s as baffling as it sounds and it doesn’t work) and, most notably, Jasmine is given a new song that makes her more of a progressive character; the song “Speechless” is a Greatest Showman type track (it was written by the same lyricists) that attempts to steer her away from being the archetypal and passive Disney princess (though the ’92 Jasmine sure weren’t no pushover!) and at the end of the day, it works in the film’s favour because it strengthens her character, gives a positive message to young audience members about speaking up and not letting sexism rule, and actress Naomi Scott delivers the number with passion and strength. Plus, (SPOILER ALERT!!) Jasmine becomes the Sultan, so that’s really cool. Like the end of Long Shot: “I’m her mister and she’s my Sultan”. 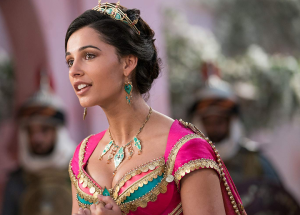 When looking at Disney’s live action remakes, examining what is kept and what new things are added, 2016’s The Jungle Book really got it right: they kept the basic structure and a couple of the more popular songs but they also came up with an apparently new script and (I’m guessing) went back to the original source material and put a bit of Kipling into it, resulting in a really fresh adaptation that felt like a whole new experience while watching. Disney remakes need to be more like this in the future.

Finishing off the negative points for Aladdin, the CGI can sometimes be a little dodgy – most notably, Will Smith’s Genie is often awkward and uncomfortable to watch – and the attempts at humour within the film often fall flat, though Billy Magnessen, stick out though he might, brings some lovably goofy charm to his brief role of potential suitor Prince Anders.

But as troubled as the film is, it’s still perfectly watchable and will provide enough entertainment for a cinema outing. It includes several dance numbers, the best ones happening at a banquet in the middle of the film and just before the end credits, and these are actually some of the better parts of the film as there’s plenty of colour involved, the choreography is accomplished, and the actors/dancers really give it their all – especially in the very last scene where everyone gets to “cut loose” and have some fun. And the film still retains the fundamentally fun story and the production/costume design is pleasing so overall, Aladdin may not truly amaze, it has flaws, but it’s probably still worth a watch. A decent adventure, though perhaps too pantomime-y.

In the title role, Mena Massoud is genuine, sweet and supportable enough and he dives into the physicality of his role as well as tackling the more emotional and humorous scenes like a trooper and alongside, Power Rangers‘ Naomi Scott is the MVP of the piece; as well as being luminous and beautiful, she’s the best actor and delivers her lines with credibility, dignity, power and conviction, giving a solid performance and fitting right in with everything, proving herself adept at the singing and dancing as well. Marwan Kenzari is alright as the much younger Jafar, a different incarnation than we’ve seen before, Navid Negahban is solid as the far less goofy and clueless Sultan, and Nasim Pedrad is charming in the “best friend” role of handmaid Dalia. A diverse cast in a mainstream film as well, so that’s something.

And as for the big, blue, loveable one, Will Smith had the daunting task of stepping into some pretty huge shoes left by the oft-imitated but never duplicated Robin Williams and he does an alright job, just being himself really by dishing out the quips, sass and natural charisma that he’s become known for but he doesn’t do enough to make his Genie memorable as he gets outshined by some of his co-stars and, despite his skill at rapping (there is a rap version of “Friend Like Me” at the very end, so exit the cinema promptly), he’s not actually great at the singing and in his musical numbers, he surprisingly lacks energy and passion and his versions of Aladdin‘s famous songs are regrettably quite awkward and iffy.

So all in all, Aladdin isn’t the trainwreck I once assumed it would be as it’s watchable and it has a good cast and some small differences to the original story can be found but at the same, there’s no feeling of real magic involved and it seems pointless when compared to the wonderful 1992 original. It’s on the same level as this year’s Dumbo but it’s really hard to work out which is better; Dumbo tried to do something different, took a bit more of a risk, but it didn’t work at all while Ritchie’s Aladdin plays it far safer by sticking to the original as much as possible and the end result is a “meh” verdict. I worked it out as being a 2.75/5 film so I’ll be generous and award it a three star rating.

But how will Favreau’s Lion King work out? Surely that’s gotta be the best one? Right?

On the whole, it’s decent and entertaining with a nice cast and plenty of colour, but it copies the original too much and doesn’t have the necessary sense of grandeur, passion, wonder or magic that’s needed for this tale.