The time has come again to celebrate the musical maestro James Horner in the fourth year of this esteemed blogathon which, as always, is hosted by Dr. Becky over at Film Music Central. It’s always a pleasure to wax lyrical about James Horner’s music and participating in this blogathon for the past three years always makes me appreciate just how gifted Horner was. So let’s look at another film that he contributed to, eh?

In previous years, I’ve looked at his beautiful compositions in the Don Bluth animations An American Tail and The Land Before Time as well as turning to live action by examining the memorable music for The Mask of Zorro, which I remember vividly from childhood, and this year, I’m going to be looking at another film that I watched a fair few times during my teen years and it’s one that has a unique and recognisable score that I, as well as many others who grew up watching the film, can easily remember and play back in my head. This is the 80s action classic Commando.

A brief synopsis first, then: John Matrix (Arnold Schwarzenegger) is a retired colonel who is currently living a “normal” and peaceful life in the hills with his beloved daughter Jenny (Alyssa Milano) but his idyllic life is shattered when his home is attacked and Jenny is abducted by psychopathic former friend Bennett (Vernon Wells) and General Auris (Dan Hedaya), who uses Matrix’s daughter as leverage to force him to assassinate the president of a South American country. With only 11 hours to save his daughter, Matrix, with the help of reluctant civilian Cindy (Rae Dawn Chong), chases down every lead he can and his quest eventually leads to a massive shootout at Auris’ compound. 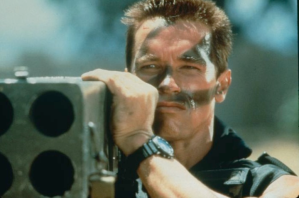 There was a period in my life when I went through an “Arnie phase” and as such, I had a videotape of several of his films that has been recorded off the TV and the first of them was Commando. As well as memorizing most of the lines and stuff, I also vividly remember the music and especially the main theme, which is quite unique and recognisable because it makes use of a steel drum and saxophone; after a quiet few opening scenes that feature no music at all, the main theme is introduced (after an explosion) and it all kicks off over images of closeups of Arnie’s famous muscles and shots of him carrying a chainsaw and a treetrunk. It immediately introduces itself to be percussion heavy and it builds for a bit before we actually get to see Arnie’s face, at which point the steel drum section starts off, later introducing a distinctive saxophone into the mix and upon rewatch, I was able to notice that Horner also makes generous use of what I believed to be pipes, later on learning that the instrument in question is a Shakuhachi bamboo flute. Along with a certain synth-y, Brad Fiedel type sound, this may seem like an odd mix, since it essentially mixes Caribbean with Japanese and whatnot, and his whole soundtrack has been called “contemporary jazz fusion”, but it sure is inventive and if you watched the film at a relatively young age, then the chances are that this singular score will be imprinted on your mind for a good long while afterwards. Not many composers are able to do that!

And after the creative theme has been introduced during Arnie’s introduction, we then do a complete 180 into a very different type of music because the opening credits are shown over scenes of Matrix spending time with Jenny and the music here is noticeably slower and “sweeter”, giving us some classic Horner strings with a distinctive orchestral feeling as the mood here is meant to reflect how much the characters love each other. This is indeed an odd way for an all-guns-blazing action film to begin and the theme here certainly reflects the important love that these characters have for each other but it’s perhaps a bit too saccharine and syrupy (not helped by sugarsweet images of the two of them feeding a goat or sticking ice cream in each other’s faces) but it doesn’t last very long and it returns to the main steel drum/saxophone theme promplty, bringing the film back into action territory.

There aren’t really many distinctive pieces to be found elsewhere in the film (except perhaps the menacing string theme that’s heard in the final confrontation between Matrix and Bennett) and for the rest of it, we hear many different variations of the main theme played in varying rhythms and with a few different instruments and all in all, the music does well in establishing menace, danger, drama and excitement when it’s needed and the beat driven, percussion heavy soundtrack and occasional synth-y techno beats sure do keep the interest up and it’s not overbearing – most of the time, scenes will remain relatively silent in order to let the important speech, fighting and shooting take centre stage – and the Japanese influence of the Shakuhachi bamboo flute is also reintroduced in the final battle to suggest that Matrix can be a stealthy and formidable warrior when required.

The only criticism I would have with Horner’s score is that it’s perhaps too experimental and at the worst of times, there’s too much going on and the music sometimes seems too messy and confused, mixing together into one big frantic jumble.

But all in all, Horner’s music for Commando is distinctive and memorable, mainly because of his usage of steel drums and saxophone, and I’m sure all who watched this in their younger years, as I did, will agree that his music is what gives the film a great deal of its appeal. Though he’s perfectly adept at scoring more “reputable” motion pictures, he’s also at ease with a big, dumb action film and it goes to show just how adaptive and multi-talented James Horner was.