Contains potential spoilers (I don’t think there are any, but you never know . . . )

While the students of his high school attempt to adjust to life after “the blip”, Peter Parker (Tom Holland) is trying to get by in a world without his friend and mentor Tony Stark, with everyone expecting Spider-Man to step into Iron Man’s shoes and to fill the void he left behind. But with a science trip around Europe with his school friends on the horizon, Peter’s pressing concern is spending time with MJ (Zendaya), coming up with a grand plan to tell her exactly how he feels, but this is put into jeopardy when several dangerous “Elementals” – huge titans made up of earth, water, fire and air – start causing mass destruction and Peter reluctantly gets pulled into the fight by Nick Fury (Samuel L. Jackson), partnering him up with the superpowered Quentin Beck/Mysterio (Jake Gyllenhaal), who has arrived on Earth from different dimension.

Taking place on a much larger scale than Homecoming, Far From Home is the very definition of a globetrotting adventure – taking place in New York, Venice, Austria, Prague, The Netherlands and London – and in a nutshell, it’s a thoroughly entertaining ride and a really great MCU/Spider-Man event that’s well worth the price of admission.

On the surface, it shines particularly brightly because he special effects and CGI in this film is incredible; we’ve got the Elementals, which are well designed and they sure do look and feel gargantuan, and all of the effects relating to Mysterio are very nicely done. On the whole, it’s a visually superior film to Homecoming because the camerawork is far less shaky and frantic and in this film, the camera often glides incredibly smoothly – particularly in a closing web swing through the city that calls to mind the work of Raimi (though with a modernised edge) – it’s far easier to see exactly what’s going on, and there’s just so much on display that, visually, it’s a treat to behold. There’s also a certain “trippy” scene in roughly the middle of the film that is particularly imaginative, exciting, colourful and just superbly designed – it may just be one of my favourite scenes on the year so far. The cinematography, production and costume design is all superb and this film manages to treat us with several versions of Spidey’s suit (that include the Iron Spider, his prototype outfit, and the new black “Night Monkey” design) and also with Mysterio’s memorable costume – that fishbowl truly is a marvel. So on the technical front, this film really shines.

But Far From Home also succeeds with its story and, appropriately for a sequel, the stakes are raised and this allows Peter to face a far greater challenge than before (though not as tough as Thanos, mind you); there’s a little bit more danger and spectacle than we saw in Homecoming and though that particular film sure did work because of its relatively small scale and personal stakes, Far From Home is far more into blockbuster territory and gives us a big, adventurous story that provides plenty of thrills, excitement and action. The storyline is original and very well written, giving us one or two twists and turns that, though some of them are actually quite obvious, often turn the film on its head as it goes in its own unique direction and most impressively, the film manages to give several supporting characters their moments in the sun; though Peter takes centre stage, the story allows characters like MJ, Mysterio, May and Happy, Ned and Betty and even Flash plenty to offer and to do in the film. It also helps greatly that Far From Home is really funny and most of the jokes hit their mark. 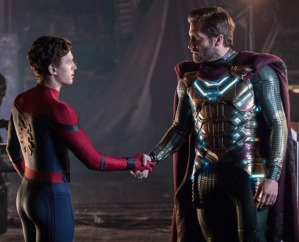 Comfortably slipping back into the role he was seemingly destined for, Tom Holland yet again shines incredibly brightly in the role of our favourite webslinger and while he’s more confident, determined and sure of himself than he was in Homecoming, he still appears lovably awkward and goofy a lot of the time, without appearing annoying or grating, and Holland also does well in the slower scenes where Peter faces several crises so overall, he gives a grounded, three dimensional performance which cements him as one of the finest actors to have played Spidey. Zendaya also makes a very welcome return as MJ, gradually making the role her own with her deadpan humour and cutting remarks, and in this film we see a softer side of her as she bonds with Peter; the chemistry between her and Holland is genuine and the many moments between the two of them are really sweet and touching – some of the best parts of the film.

Of course, the beloved Jake Gyllenhaal also puts in an appearance and he certainly is a huge asset to this film; at the beginning, he appears as the super serious and troubled, but also confident and reliable, superhero and for this part, Gylenhaal does well by hamming it up – though thankfully not too much that it becomes comical – and somewhat making fun of all those typical superheroes who have extraordinary powers, a colourful costume and a tragic backstory (COUGH – THOR – COUGH) but also appearing as a kindred spirit to Peter and a mentor figure that he can talk about hero stuff with. For rest of the film, Gylenhaal gets to cut loose a little bit, injecting a bit of his mad personality into the character as well as an air of menace and power, and overall, Quentin Beck/Mysterio proves to be one of the more intriguing characters of the MCU, one who doesn’t need to rely on superpowers to make him a force to be reckoned with, and Gylenhaal is pitch perfect in the role.

Elsewhere, Marisa Tomei and Jon Favreau provide plenty of heart and humour as May and Happy, Jacob Batalon is still loveable and charming as “guy in the chair” Ned, Angourie Rice has so much more to do this time as Betty Brandt, as does Tony Revolori as Flash, Martin Starr takes on a lot of the comedy in his beefed up role of the class’ clueless teacher, Curb Your Enthusiasm‘s J.B. Smoove attempts to add some more comedy as the second chaperone but sadly, doesn’t quite convince, and Samuel L. Jackson is as excellent and funny as ever playing the commanding Nick Fury. With added scratch marks around his eye for post-Captain Marvel continuity.

And as always, there’s both a mid and post credits scene; the one at the end turns everything we saw before on its head, but maybe it raises a few more questions than it answers, but the mid-credits scene is particularly fantastic – finishing the film with a big shock and with the appearance of a character that will surely have everyone cheering.

An entertaining, globetrotting adventure that’s supported by a strong story that’s full of humour, heart and drama, amazing special effects, a formidable antagonist, and the sweet, funny and charming scenes between Tom Holland and Zendaya.