The third season of this Netflix original series sees Ruth (Alison Brie), Debbie (Betty Gilpin), and all of the other Gorgeous Ladies of Wrestling relocating themselves and their show to nightly performances in Las Vegas and as the wrestlers gamble, party hard, and deal with various problems in their downtime, Ruth struggles to find her place in the world, as well as developing complicated feelings for brash director Sam (Marc Maron), while Debbie tries to make her voice heard as a producer in an infamously male-dominated environment.

When I first watched the first series of GLOW, I thought that it was alright as it had fun characters but was let down by several “soap opera” storylines and a certain lack of actual wrestling scenes but upon a rewatch, I enjoyed it more as I had more fun with it and appreciated the colourful characters a whole lot more. Regarding the second series, I saw it as a big improvement on its predecessor as there were definitely more wrestling scenes, the supporting characters were given much more to do, the writing was much improved and on the whole, it was bigger, brighter, louder, funnier, and generallly more fun and energetic than what came before. So how does series three compare? Well, on balance, I’d say that the second series is still the best but this particular series is extremely close behind because, while it has some minor flaws, the show succeeds through its truly excellent writing, relevant storylines, and the wholehearted development of its brilliant central characters.

“Freaky Tuesday”: A hoot of an episode!

Starting off with GLOW’s biggest asset, the characters in this series continue to be a really lovely and supportable bunch who you’d just love to spend some time with and they’re given life by an exquisite ensemble cast but most importantly, in stark contrast to the first series where many of them were relegated to the sidelines, the third series seems to pay equal attention to (mostly) every supporting character in the central GLOW team and they’re given plenty to do and the often superior writing lets all of them come to life so much better than before.

At the forefront, Alison Brie is again wonderful as Ruth Wilder and in this series, while still being the ultra-committed, conscientious, reliable and hard working cast member we know her to be, she begins to realise that her future is uncertain and as the series goes on, we truly feel her struggle as she sees her friends move on to other things and begins to realise that she may never become a “proper” actress, as well as struggling to deal with her newfound feelings for Sam. As before, Alison Brie is a very welcome presence in the show and on the one hand, she can be incredibly funny and endearing in the comedic scenes but equally, she utterly convinces in the more dramatic moments, showing plenty of genuine uncertainty, awkwardness, frustration and sadness when required and overall, though she doesn’t have quite as much to do as in the first two series, Ruth is a credible and supportable mainstay of the show and Brie is multifaceted and endearing in the part. And right alongside, Betty Gilpin is stronger than ever as former soap star turned producer Debbie Egan and in this series, she has to cope with being away from her son for several months, having to commute all the time and missing all the important events at home, and as one of GLOW’s producers, she has to keep the show afloat while attempting to be heard in amongst all the chauvinism and toxic masculinity; Gilpin is certainly given meaty material to work with and she definitely sells it – with the help of the smart writing, her character is given plenty of depth and, as another mainstay of the show (well they all are, really!), she makes the character her own and fully convinces in her role. 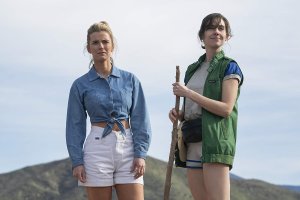 And there are so many other noteworthy characters who make the show worth watching: Marc Maron is again delightful as sleazy but caring director Sam Sylvia and Chris Lowell is given a bigger part to play in his role of producer Bash Howard as we see success get to his head and he constantly hides the fact that he’s secretly gay and as for the wrestlers, they’re all outstanding – even characters like Vicki the Viking and the Beatdown Biddies who yet again fall by the wayside slightly – and in particular, Gayle Rankin, Sydelle Noel, Kate Nash, Britney Young, Jackie Tohn, Kia Stevens, Sunita Mani, Shakira Barrera and Ellen Wong simply make the show what it is as they play Sheila, Cherry, Rhonda, Carmen, Melanie, Tammé, Arthie, Yolanda and Jenny with such commitment, emotion and so much good humour; they’re a most dysfunctional and entertaining TV family – having plenty of disagreements and arguments but clearly caring about each other and giving us plenty of laughs and “all the feels” along the way.

There are also one or two new additions, though none that steal the limelight from our small family of wrestlers, and in series three, Geena Davis features in several episodes as veteran entertainment director Sandy Devereaux St. Clair, creating a little conflict as she has disagreements with Bash but she also has a most noteworthy performance towards the end of the show, King of the Hill regular Toby Huss appears towards the end as Debbie’s sugar daddy rancher boyfriend “Tex”, and most prominently, Kevin Cahoon makes a lasting impact as Bobby Barnes, a confident and entertaining drag performer who teaches Sheila a thing or two that prompts her to alter her lifestyle, and he has a showstopping musical number at the end of “Say Yes”, performed in front of Bash, which ends the episode on a most compelling and unexpected note; Bobby Barnes is a memorable character and Kevin Cahoon manages to entertain and to illicit plenty of emotion in the role.

As mentioned before, the writing in this season of GLOW really is something special because there is so much focus on character development and most of the participants get their own storylines and impressively, most of them are equally as impactful, so many supporting characters getting an equal “piece of the pie”; in this series, Sheila takes up acting and comes to a big decision regarding her identity, Cherry falls out with her husband over whether she wants to have a baby or not, Arthie and Yolanda begin a romantic relationship which soon hits uncertainty and troubled waters, Tammé suffers through back problems, Rhonda tries to make her relationship with Bash work out and they both change somewhat when they come into some money, Melanie and Jenny fall out over the show’s stereotyping but then bond over their families’ sad pasts, and Justine writes a screenplay that both she and Sam try to sell. It really is top tier writing as many of the early episodes are genuinely heartwarming and funny but as the series moves on, we move into the “heavier” stuff and those episodes are genuinely emotional and since we’ve spent so much time with these characters, we truly feel their troubles and the dialogue that passes between them is just very well written – the incredible “Outward Bound” being a perfect example of exemplary character building and dialogue. The stories also tap into issues regarding body image, toxic masculinity, hate crimes and the freedom of choice and through the solid writing (the very best episodes being penned by series creators Liz Flahive and Carly Mensch), GLOW is ultimately a thoughtful, relevant and properly powerful series.

But my biggest problem with the third series is one that affected the first series: there’s a noticable lack of wrestling scenes. In fact, series three has the least amount of wrestling so far and when we do see it, it’s underwhelming and isn’t nearly as energetic or imaginative as what came before – even a potentially amazing Christmas themed show at the end is particularly brief and definitely isn’t as amazing as it could have been. Since GLOW looks to be slowly wrapping up, with characters moving on and focusing more on their own lives and less on the show, it makes sense that we don’t see a lot of wrestling and that this series is the most character-driven one so far, but the wrestling scenes of the previous two series were just so engaging and riotous to watch that it’s a shame we don’t get to see more of them in this series. Though the “Freaky Tuesday” episode where the actors all switch roles for a night is just wonderful, funny and amazing. The series also isn’t as naturally exciting as before since many episodes seem to take place on the actors’ days off, filling the series with “footage” of them on their downtime, and another minor quibble is that one episode ends with Debbie trying to control her weight, following some chauvinistic comments she previously heard, and this had the potential to be a hard hitting storyline concerning body image and how women are “supposed” to look but this plot element doesn’t come back and so, a big opportunity was missed.

And as usual, the series is brightly designed and, with a new Vegas location to play around in, the locations as well as the outlandish 80’s hair, makeup and costume design is right on the money and as before, we get to hear some banging tunes with tracks from artists like Englebert Humperdinck, Heart, Kate Bush, Bing Crosby and Scandal who, as always, open the series with their tremendously awesome hit “Warrior” – always a perfect fit for the show.

Although the wrestling is in regrettably short supply, GLOW more than makes up for this with its exemplary writing that further develops its magnificent characters like never before, and it’s all brought to life by a continually endearing cast, many powerful moments, and a bright, appealing design.

So, that was GLOW: Series Three. A Netflix original that was granted a third season. A rare thing nowadays.

But will we be lucky enough to see a fourth? With the axing of the amazing Daredevil still haunting us?

I really hope so – it’s just too good to cancel.