27 years after they defeated the evil shapeshifting monster Pennywise (Bill Skarsgård), the members of the Losers Club are called back to Derry when it appears as though the dangerous being has resurfaced and as they attempt to remember just what happened to them the first time, their time away from the town having slowly erased their knowledge of Pennywise, they each attempt to gather certain “artifacts” so that they can perform an ancient ritual and get rid of the entity once and for all.

The first time I watched 2017’s It, I went away thinking that it was an entertaining and imaginative film with a truly memorable villain right at the centre (played incredibly by Bill Skarsgård), as well as a group of really endearing young actors, but I thought the scares were a bit lame and as a horror film, it was slightly basic and definitely didn’t bring anything different to the genre – just random monsters, silence, and characters walking veeeeery slowly towards different creepy sounds. After that, I watched it twice more (once right before Chapter Two) and, perhaps encouraged by a lot of praise from the blogosphere, my appreciation of it grew and despite the slightly generic scares and random monsters, I would conclude that the first It really is a great literary adaptation and the central group of young actors, as well as its main antagonist and overall design, really make it work.

But does Chapter Two prove itself to be as good as its predecessor? Well, maybe I need to see it a couple more times like I did with the first one, but right now, I’d say: not really. 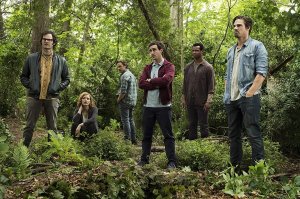 To it’s credit, Chapter Two starts off excellently and it’s in the first quarter where the film really shines; we start off with an effective scene that reintroduces our favourite horror clown and straight afterwards, we get to know the adult incarnations of the Losers Club and it’s satisfying to see how most of them resemble and act like their younger counterparts, as well as learning of the direction that their lives took ever since their life changing encounter with Pennywise. It’s a marvellous thing when they finally reunite in a Chinese restaurant but when they slowly realise that one of their members has fallen and that the dreaded monster will indeed be coming back for all of them, events take a brilliantly sinister turn and it’s in this section of the film, when the dread slowly creeps back in and the adults become more fearful, where the horror is at its most effective. We also get to learn a little about the origins of “It”, as well as what must be done to stop him, and at this point, it seems as though the story will indeed be expanded upon and Chapter Two promises a film that will truly put the adult actors through their paces. Plus, we are treated to another great Pennywise scene at a baseball game (though it’s certainly not as memorable as Chapter One‘s iconic opening encounter in the rain) and it gives Bill Skarsgård another opportunity to revel in the madness and dark comedy of the villainous character.

But there comes a point when Mike essentially says “go and gather your artifacts and we’ll meet up later” and from this moment, Chapter Two hits a rather lengthy rough patch because until the final confrontation, there is a massive lull in the film and it’s in the lumbering middle section where things get less interesting, more repetitive, and often a little aggravating.

When the central group splits up (not a good move), the episodic narrative is then dedicated to following each one wandering around town in search of their “artifacts”, each one of them reliving certain moments from their past and facing several scares from Pennywise, and as this happens to each character, events do indeed get repetitive and furthermore, one of the main issues that hindered Chapter One comes back in this film – those tiring instances of random monsters and scares that aren’t nearly as scary as they should have been. The film also reintroduces its younger cast in a hefty amount of flashbacks but, endearing though they are, this is detrimental to the film because the adult actors aren’t actually given enough to do and at the end of the day, we had our share of the kids in the first film so Chapter Two really should have focused far more on the adult actors, giving them time to develop the older versions of their characters and showing off the camaraderie and chemistry of the new group. There is an almost “deleted scene” of the younger characters discovering their clubhouse but this is where it should have ended for them – the kids had their movie, let the adults take over!

After the drawn out middle section (where, objectively, not much actually happens), we eventually come to the grand finale and although it ultimately turns out to be an entertaining and satisfying enough end to the saga that goes on for longer than the finale of the first one, dials up the crazy, and goes in a way that most audience members really won’t be expecting, it’s not entirely smooth sailing because the special effects don’t always hold up (the CGI often borders on just being silly) and, despite being a malevolent, fearsome, shapeshifting force, the creature ends up doing relatively little damage. The final act also shows the film’s capacity for mawkishness as there are plenty of heartfelt moments included and while the heart of the first film was quite affectionate and wholesome, many tender moments of Chapter Two come across as a little sappy. I mean, just how many times must it reference Ben’s poem to Beverley? I’m pretty sure the phrase “January Embers” is mentioned about a dozen times – give it a rest!

The new cast members of Chapter Two are a solid bunch and although they aren’t allowed to lead the film as much as the kids did previously, the main cast deliver coherent and strong performances and are a great, committed bunch who they do everything they can to “carry the torch” as best they can. As Bill, James McAvoy is as confident a performer as he’s always been and he effectively gives us a version of his character who is filled with a certain amount of uncertainty as he continues to regret what happened to his younger brother and shows that he’s more reluctant to face Pennywise again; this film doesn’t allow the talented actor to show his skills as much as this year’s Glass did but McAvoy is solid in the part and continues the story arc of the character very well. Jessica Chastain also proves that she’s an ideal fit for the role of Beverley (even though Amy Adams surely would’ve crushed it as well) and like Bill, she too is filled with doubt and fear over what will happen if they face the clown again and in addition, she tries to sort out her feelings for Bill, oblivious to the attentions of Ben; Chastain really throws herself into the role and ends up as a worthwhile and supportable member of the club.

Alongside, Isaiah Mustafa gets a lot more to do than Chosen Jacobs did in the role of Mike, somewhat taking over the role of leader in the group as he does all the extensive research and is the one who is most determined to face Pennywise and defeat him, Jay Ryan has exactly the same eyes as Jeremy Ray Taylor and definitely looks at Beverley in the exact same way, Tangerine‘s James Ransone really brings the part of Eddie to life and he offers plenty of humour and heart to the role, and Bill Hader is this film’s MVP as he’s the funniest cast member and completely nails every single one of his lines and acts as the “class clown” and trashmouth in a way that Finn Wolfhard wasn’t quite able to do in the first film – an early joke about Ben and Beverley having gotten far more gorgeous while he clearly went downhill got the biggest audience laugh in the screening that I attended, for sure.

And, of course, Bill Skarsgård proves to be a perfect Pennywise and although he made more of an impact in the first film, he’s still clearly having a blast playing the character and he performs the part with glee and infectious showmanship.

Design-wise, the film is up to scratch as the production design is admirable, the central locations are ideally utilised, the cinematography is accomplished, the de-aging technology is used so very well that you won’t even notice that it was used – I definitely didn’t and assumed that the kids’ scenes were either filmed back in 2017 or that they just didn’t age too much in that time – and overall, Andy Muschietti directs the film well but he does allow the pace to drag and he really should have shortened and streamlined that mammoth middle section as well as making the film scarier and more unique to the horror genre.

The cast is able, the story is good, and Bill Skarsgård continues to be a particularly remarkable Pennywise, but Chapter Two falls short of its predecessor due to its lumbering middle section, generic scares, mawkish sentimentality, some silly CGI, and an apparent refusal to let the adult actors fully take the lead.