Picking up directly on from where season five of Breaking Bad left off, El Camino sees Jesse Pinkman (Aaron Paul) escape from captivity and with the assistance of Skinny Pete (Charles Baker) and Badger (Matt Jones), he attempts to get someplace safe and to evade the police, who want to apprehend him after the mass shooting that occurred at Jack’s place, but escaping won’t be an easy task as he has trouble finding a very large stash of money, which is also being sought out by several opportunists, and he is also haunted by several ghosts from his past.

First of all, I, like countless others, am definitely a Breaking Bad fan and having seen it three times through (there aren’t many series I’d see that many times), I wouldn’t disagree if you told me that it was one of the greatest TV drama series ever. So when news of a Breaking Bad movie was announced, this was a cause of much anticipation and excitement because the franchise can do no wrong and if there were to be a movie featuring the popular characters of the show, it would surely be a big, bold, exciting and dramatic event – one that would treat us to a whole new adventure and give us that exhilarating drama that we’ve come to expect from the show.

But alas, this wasn’t to be because El Camino is a surprising disappointment. A film that sadly pales in comparison to its parent show (as well as Better Call Saul) and gives us none of the high octane drama, excitement or even the interest of the beloved TV series.

While it isn’t a complete write-off, as it does thankfully look good, the acting is solid, and there are two or three good scenes, the main problem with El Camino is that the story is uninspired, not a lot actually happens, and it’s certainly not a storyline that’s “film worthy”; over the course of two hours, the film merely sees Jesse go from Point A to Point B (with a few setbacks in the middle) in his quest to escape to Alaska but this incredibly thin story is stretched out over the runtime and is padded out by several flashbacks which feature “cameos” from favourite characters and very long and protracted scenes of Jesse either doing nothing, moving from place to place, hiding, or looking for something or other. Instead of upping the ante and giving us something original that we wouldn’t have seen in the TV series (as film adaptations of TV shows are supposed to do), this film is merely an unnecessary epilogue – an afterthought that gives fans a bit of extra Breaking Bad material when they really didn’t need any, seeing as how the show ended perfectly with no real need to give us another chapter. There was also potential to further explore the genuine suffering that Jesse went through when in captivity and to observe his damaged state of mind directly after the harrowing experience, delving into PTSD would’ve been something, but meaningful storylines like this are skimmed over and although the film has a two hour runtime, with the material that it has, the story could’ve been told in 45 minutes.

Ultimately, this is what it boils down to: El Camino is two unaired, unseen and previously forgotten about episodes of Breaking Bad (and not very good ones, at that) that have been stuck together and passed off as a movie. The many flashback sequences appear too much like deleted scenes or DVD bonus features and though some would argue that this is much more of a character study and a chance for Aaron Paul to take the spotlight, the sad truth is that the film doesn’t do enough to justify its existence and it doesn’t offer fans anything worthwhile, just a little bit of extra Breaking Bad material and a chance to see their favourite characters again for a brief period of time.

On the plus side though, the cinematography, design and the general look of the film is pretty much as good as you’d see in the show, some of the humour works well, a couple of scenes (the confrontation with the “police”, the duel and Jesse’s head-to-head with Ed Galbraith) are intriguing, and the acting is good; all the returning players slip back into their roles as if they’d never left, Aaron Paul gets lots more material to work with and shows Jesse’s inner conflicts, pain, determination and a particularly haunted demeanor very well, and the now late Robert Forster (R.I.P.) is excellent as super cool “fixer” Ed Galbraith. And despite its underwhelming and uneventful storyline, the film still proves to be a somewhat decent watch as there’s always the promise of something hiding around the corner, so to speak, and it does a good job in building up a tense and dramatic atmosphere.

So at the end of the day, this is Breaking Bad so you can’t really go wrong and even if El Camino is just one long, sub-par episode of the famous TV show, it still beats some of the genuine junk that’s out today but when viewed alongside the the mighty parent show, El Camino just doesn’t measure up and given the exquisite source material, it could’ve, and should’ve, been so much better. 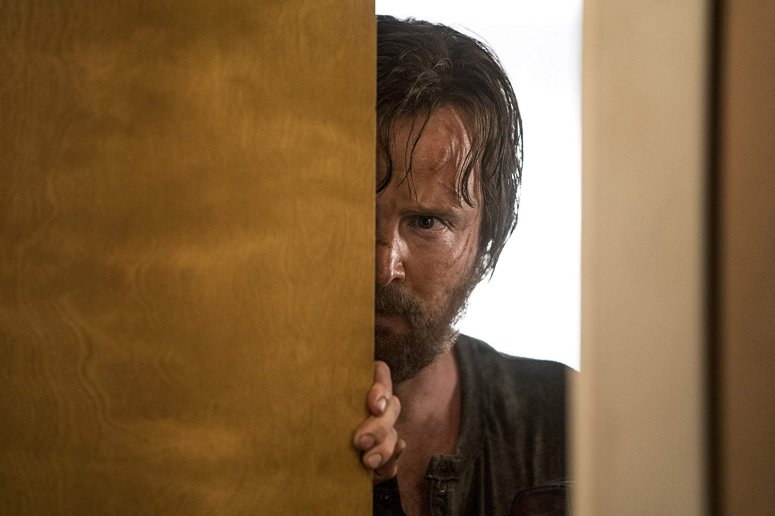 While it’s not without merit, given the cinematography, acting and a smattering of good scenes, El Camino takes a long time to say nothing important or necessary and it simply exists as a pointless epilogue – two bog standard Breaking Bad episodes stuck back to back and passed off as a movie.