A prequel to Jim Henson’s 1982 film, Age of Resistance takes us back to the land of Thra where the sinister Skeksis rule over the land, dutifully followed by the seven Gelfling tribes who obey their rules and leadership without question, but when young palace guard Rian (Taron Egerton) witnesses them forcefully draining the essence of one of his close friends (beginning their effort to achieve immortality), killing her in the process, he is hunted by the Skeksis and is branded a dangerous traitor, eventually crossing paths with wilful Princess Brea (Anya Taylor-Joy), who has seen a mysterious symbol and has set out to find what it means, and the kind, cave-dwelling Deet (Nathalie Emmanuel), who experiences a vision that prophesies chaos and darkness in Thra; assisted by several others and facing danger in many forms, the small team sets out to end Skeksis rule and to prevent a dangerous “darkening” from destroying the land. 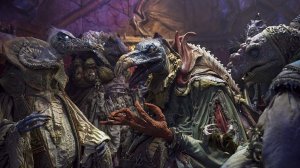 When people started talking about this new, popular Netflix series, singing its praises on social media, I decided to watch the 1982 film for the first time and while I didn’t exactly love it, finding it to be only okay and noticing several flaws and dodgy areas, I appreciated the puppetry involved as well as the imaginative fantasy story and afterwards, I started watching Age of Resistance in the hopes that it would be a modern “step up” from the popular 80’s film. And “step up” it did because Age of Resistance is a remarkable and astounding series that shows off plenty of remarkable puppetry, an unbelievable voice cast, wonderful design, and an exciting and genuinely thrilling story that will make you smile and warm your heart but will also shock and may even give you a scare or two.

First of all, credit has to be given to the design team, the artists, the animatronics department, and the remarkable team of talented puppeteers who put in so much hard work on this show; while Henson’s original film had a unique design and showcased some of that great puppetry that we expect from the team behind The Muppets, the technological advancements of today allow the series to go several steps further and as such, the world of Thra is greatly expanded, letting us experience and explore huge new areas that we haven’t seen before and the design of the locations, the props and the characters are incredibly colourful and often breathtaking. With this series, taking inspiration from Brian Froud’s original designs, the team of designers and artists have crafted so many things by hand and as such, every little detail – every blade of grass, every lock of hair, every rock, tree and creature – was painstakingly designed and crafted and so in the end, Age of Resistance ends up as a truly remarkable looking series that is always a joy to experience.

At one point, Age of Resistance was envisioned as an animated series and then as a mix of both CGI and puppetry in equal measure, but the wise decision was made to stay true to the original source material and to keep a strong focus on puppetry and this was clearly the best decision; alongside a splash of CGI here and there, the puppeteers of the Jim Henson company prove themselves to be an enviously talented group and, working hand in hand with the teams of writers, designers and actors, they breathe so much life into their creations and are fully capable of getting the characters to emote, using their well thought out facial expressions (with assistance from some robotics work) and movements – it’s a gruelling job that requires plenty of strength, skill and acting ability but the commited team pull it off quite spectacularly.

Another thing that makes Age of Resistance so special is its story and direction; as hinted at before, this new series greatly expands on what we learned in the original film and delivers a very ambitious and multilayered story that manages to balance several side stories and ultimately offers up an imaginative, exciting and very dramatic fantasy saga. Under the pen of Jeffrey Addiss, Will Matthews and David Slack, and with assistance from the novels of J.M. Lee that further explored the Dark Crystal universe, the writing is particularly strong as all of the dialogue hits the ear perfectly and the overarching story is smart, imaginative and it expertly manages to be funny, heartwarming and emotional while also being dark, tense and chilling when it needs to be. Because that’s another thing about this series: when it gets dark, it gets DARK and there are certain parts (the Scientist’s eye, the Arathan attack) that definitely managed to unsettle and unnerve me and, just as it was with the original film, the series doesn’t shy away from the darkness and it acknowledges that exposing young audiences to scary things isn’t necessarily a bad thing.

All episodes of the series are directed by The Incredible Hulk‘s Louis Leterrier and he “steers the ship” brilliantly by getting the balance of humour, action and darkness just right and by working closely with the puppeteers and designers, he makes sure that the show looks as gorgeous as possible, that the action is imaginatively staged, and at the end of the day, he can be proud that he has helmed such a wondrous and epic fantasy adventure.

And complimenting the wonderful puppets are the impressive voice actors that help bring them to life; Age of Resistance may just have the most insane cast list of the year, TV and film included, and when you look at the list of big names, you can see that the show’s production team really went berserk, impressively getting so many recognisable actors to participate in the project. In it we have . . . Taron Egerton, Anya Taylor-Joy, Nathalie Emmanuel, Gugu Mbatha Raw, Jason Isaacs, Simon Pegg, Mark Hamill, Benedict Wong, Awkwafina, Harvey Fierstein, Keegan-Michael Key, Ralph Ineson, Lena Headey, Helena Bonham Carter, Mark Strong, Eddie Izzard, Natalie Dormer, Toby Jones, Bill Hader, Andy Samberg, Harris Dickinson, Hannah John-Kamen, Shazad Latif, Theo James, Nina Sosanya, Alicia Vikander and Sigourney Weaver; they all contribute brilliantly to the show but singling out a few, Taron Egerton is his usual charismatic self as the increasingly heroic Rian, Simon Pegg stays faithful to Frank Oz’s original vocal interpretation of the scheming, nasty Chamberlain while having fun with it and expanding upon the part, Mark Hamill is ideally cast as the mad Scientist, and Nathalie Emmanuel is perhaps my favourite as the kind and caring Deet, projecting plenty of warmth, humour and heart into the purehearted character.

And there’s Victor Yerrid who operates and voices the Podling Hup and it’s truly a memorable performance and with his distinctive voice, personality, design, and the way in which Yerrid operates him, Hup ends up being one of the best, most entertaining characters in the show and he will surely be a massive fan favourite.

An exciting, imaginative and thrilling fantasy adventure that pays loving tribute to Jim Henson’s 1982 film while greatly expanding on it; Age of Resistance looks spectacular, the puppetry is incredible, the story is engrossing, the voice cast is impressive, and it manages to be funny, heartwarming and emotional while also being tense, unnerving and dark.