Having seen the latest entry in the Star Trek film franchise the other day, I thought it would be a good idea to celebrate the 5 best features that this franchise has given us.

So with thrusters on full, let’s get into it!

The last big hurrah for the cast of the original series, The Undiscovered Country is indeed a worthy addition. With a mystery to be solved aboard the Enterprise, a Klingon prison to be broken out of and a huge, shocking political conspiracy to be slowly unravelled, this film constantly hits the mark and delivers an interesting, confident, fun adventure. The original crew goes out on a high.

Surely the funniest film in the series, The Voyage Home has a wonderfully unique story, great music and is a perfect mix of intriguing sci-fi and fish-out-of-water comedy. With Kirk and Spock having to take the bus (“what does it mean: “exact change only”?”), Scotty trying to use an 80s computer by speaking into the mouse and Chekov asking about those “nuclear wessels”, it is a fun, engaging treat of a film.

A very worthy reboot indeed! With a whole new cast and crew, this new generation of Star Trek is colourful, fun, exciting and epic. It does have a pretty generic villain in Eric Bana’s Nero (though his “Hi Chris, I’m Nero” delivery is excellent!) but it’s a veritable breath of fresh air, with plenty of references to the original series and a great handover from the late, great Leonard Nimoy. Also, it’s Chris Hemsworth’s best role – sorry, Thor! 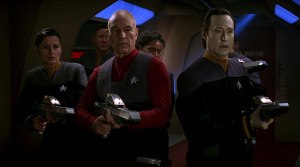 By far the finest adventure for the TNG crew, this film is near perfection. It boasts awesome visuals that still hold up in this day and age, a terrific villain in Alice Krige’s Borg Queen and a thrilling, intelligent story. Plus, Picard’s personal vendetta with the Borg allows for some perfect character development and excellent acting from the great Patrick Stewart.  Oh, and Trek favourite James Cromwell is wonderful as Zefram Cochrane.

Yeah, no surprises here. Ricardo Montalban’s Khan is truly the greatest Trek villain and the rest of the film has great space battles, a perfect score from the late, great James Horner and a wonderful theme of old age that becomes more poignant across repeated viewings. And of course, there’s that emotionally draining scene at the end which is truly legendary. Everybody now: “KHAAAAAAAAAN!”