This was a film that I was planning on giving a miss. I saw the trailer every time I went to the cinema (probably around five times, at least) and I thought that the film looked a little too preachy and obvious – one that it wouldn’t have hurted to just skip entirely. But then I gradually started hearing some really positive buzz around the ol’ blogosphere and decided to finally give it a chance, a part of me suspecting that the film would indeed be better than the trailer suggested.

Ultimately, I was right to give the film a chance because The Hate U Give is a very rousing and powerful film with a strong story, admirable direction, crisp cinematography and a whole host of superb performances – especially from its leading actress.

The film is about 16 year old Starr Carter (Amandla Stenberg), a teenager caught between two worlds as she lives in the mostly black neighbourhood of Garden Heights but attends a mostly white private school and one night, she witnesses her unarmed childhood friend being shot and killed by a white police officer, which leads to a mass outcry when the officer in question isn’t properly punished. Facing the prospect of having to testify before a grand jury and with the rest of the community in an increasingly violent uproar, Starr struggles to decide on whether she should speak up or not, fearing for the safety of her family and for the way she would be treated at her school.

While there have been several recent films and TV shows which have made it their mission to show us the ongoing injustices faced by black Americans (Detroit, BlacKkKlansman, 13th, Straight Outta Compton, Orange is the New Black, even a recent episode of Doctor Who), The Hate U Give admirably manages to make its own voice heard in amongst these features because it is a film of such raw power and emotion that truly wants us to get mad and angry at the outrageous and unfair world in which white policemen get away with murder, and racism and prejudice (both blatant and subtle) is still commonplace. And the film clearly succeeded in this regard because it did make me feel angry – always admirable when a film actually manages to stir my emotions.

The solid direction from George Tillman Jr. and the finely tuned screenplay from Audrey Wells (basing it on Angie Thomas’ novel of the same name) go hand in hand to make the film work so well; Tillman Jr.’s direction is effective because even with a runtime of over two hours, the film has an incredibly smooth flow and not a single moment is wasted or boring – it’s a film that you can easily get lost in and not once wonder about how much time remains. He also films the kinetic scenes of pandemonium and violence expertly as you can always see just what is going on and he infuses much of the film with a tangible sense of drama and tension, especially in the pivotal scene where Starr watches her friend get shot and in a heart stopping moment right at the end – the most dramatically tense and shocking standoff since Wind River.

With the assistance of Mihai Mălaimare Jr.’s cinematography and editing from Alex Blatt and Craig Hayes, the film also looks visually crisp and often lovely to look at. The cinematography is especially noteworthy due to the dual colour palettes used; to illustrate Starr’s “two worlds”, the scenes in Garden Heights are filmed with warm colours (to emphasise themes of home and family) while scenes set at her private prep school are filmed with colder colours to suggest a more artificial and sterile environment, a different world to the one in which she feels truly comfortable.

Audrey Wells’ script also hits the right notes because, while it can’t really avoid slipping in those “trailer worthy” lines, the dialogue is finely tuned, always genuine, and the writing doesn’t veer off into obviousness or mawkish sentimentality. Overall, the writing is intelligent and powerful with a mightily important, rallying cry of a message, and a clear arc for the main character. The film also finds time for scenes that are full of warmth and heart which go alongside the more shocking parts of the story; the script gives us some lovely scenes with Starr and her family, friends and boyfriend and all this allows for a very good balance of both tenderness and shocking drama. 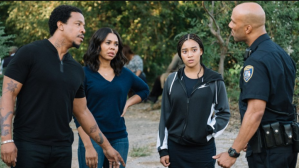 The film has a strong cast who all contribute to bringing this piece to life but dominating proceedings is Amandla Stenberg, who plays the main character of Starr Carter. Earlier this year, she managed to impress with a superb performance in the otherwise disappointing The Darkest Minds but here, she gets a project truly worthy of her talents and she greatly impresses as Starr, imbuing the character with plenty of depth and genuine feeling – a three dimensional character who we always get behind. In the film, there are plenty of moments where Starr appears as your average high school girl – perfectly likeable, funny, charismstic and smart – but as the horrifying events take over her life, she displays grief, fragility, confusion and despair, eventually accepting her “role” and showing off incredible anger and outrage in the final confrontation during the City Hall march and in a closing scene where she lays down the law with her subtly racist schoolmate.

Stenberg also excels as “Starr: Version Two”, the unassuming and reserved version of herself that she affects while at the posh school, showing how she feels it necessary to tone down her personality for fear of being labelled as a charity case and all in all, Stenberg’s nuanced and well balanced performance forms the backbone of this film and the talented young actress confidently carries it on her shoulders – the girl’s a superstar.

As for the supporting cast, Russell Hornsby plays a very important part as Starr’s father Maverick; he’s the one who knows all too well the unfair treatment that his family will face (shown in an incredibly jarring and eye-opening opening scene where he explains to his children just what to do when they’re pulled over by the police) and throughout the film, he’s the defiant patriarch at the head of the household, doing everything that he can to keep his family safe, even if it means throwing himself into the firing line – he’s a memorable and impressively strong side character. Regina Hall also makes her presence felt as Starr’s staunch and protective mother who is determined to keep her away from public scrutiny, KJ Apa is solid as Starr’s caring boyfriend Chris, Detroit‘s Algee Smith is charismatic and likeable as the troubled and ill-fated Khalil, and Anthony Mackie is quietly intimidating, but never cartoonishly evil, as drug dealer King.

An incredibly powerful, stirring and important film with assured direction, a solid script, striking cinematography and an amazing lead performance.