Forrest Tucker (Robert Redford) robs banks. But he does so in a most unique way in that he takes his time to make his move and when the time is right, he casually moves in, shows the gun to the bank teller, politely explains that it’s a robbery, asks them to hand over the money, and then walks back outside with a gentlemanly smile and a kind word. Tucker is an habitual criminal offender, having participated in many thefts and no less than sixteen prison breaks since he was thirteen, but with police detective and family man John Hunt (Casey Affleck) on his case, coupled with a potential relationship with Jewel (Sissy Spacek) on the horizon, could it finally be time to leave behind the life he’s always known?

As you may have gathered from that little synopsis, The Old Man and the Gun is a very different kind of heist movie because it’s incredibly mellow and laid back. A far cry from something like Baby Driver, there is no youthful protagonist nor any killer tunes (except for “Lola”!), snappy editing, crazy shootouts or high octane action sequences. Instead, we have an experienced and clever “over the hill” bank robber, a soundtrack of smooth jazz, only one or two car chases and a couple of very easygoing robberies that are more comical than tense. In fact, the biggest bank job in the film, the only instance where shots are fired, takes a little inspiration from Reservoir Dogs and isn’t even seen.

Writer/director David Lowery (who gave us the amazing A Ghost Story) makes it crystal clear that this film will be a relaxed affair right from the off and as we quickly accept this, the film proves itself to be a most pleasant outing, allowing us to enjoy the goodhearted humour, the endearing performances, and the pleasing cinematography that creates a late seventies/early eighties aesthetic very effectively. His script is great because it contains so much crisp, clever and perfectly pitched dialogue for the actors to work with and as for the story itself, it’s most unique; it’s based around actual events and, as with films like I, Tonya and American Animals, it has that tongue-in-cheek “loose adaptation of facts” element about it. It’s also worth noting that Lowery’s story doesn’t strive to have any deep, meaningful, profound themes like “the banks are the bad guys” or “there’s no place for the old” or anything like that. Instead, The Old Man and the Gun has a very uncomplicated, character driven story that doesn’t need to be deciphered and it’s one which appears to be a love letter to Hollywood films of yesteryear, with something of a western inspired vibe included.

But the film’s easygoing and relaxed nature also presents a bit of a problem because after a while, audiences may end up wishing for a little more conflict or a truly exciting plot development to make things a little more interesting. The film essentially stays on the same level throughout (it’s the cinematic equivalent of a leisurely autumnal walk through the park) but while it’s commendable that Lowery has commited to this approach, letting the fine dialogue and the strong performances shine through, The Old Man and the Gun has limited rewatch value and is something of a “one and done” feature film that may soon be forgotten about.

Lowery’s film has a great host of very strong, unshowy performances and front and centre is the great Robert Redford – apparently in his final film role. As the polite, gentlemanly and clever recidivist Forrest Tucker, Redford is as commanding a screen presence as he’s always been and throughout the film, he’s magnetic, charming, supportable and he works very well with the script, nailing the affectionate humour with an irascible spirit, and with all members of the cast. Opposite him, Sissy Spacek is just as good and, although her character of Jewel is two dimensional and underdeveloped, she and Redford play off each other brilliantly. The better scenes in the film feature these two seasoned actors and in particular, an early diner scene allows their incredibly magnetic personalities to shine through, lighting up the screen as they bounce the dialogue back and forth, and in a later scene set outside a jewellery store, they remarkably manage to tell a story through facial expressions alone.

Elsewhere, Casey Affleck is a fine fit as Detective John Hunt – the officer who tries his hardest to see justice done and to catch and arrest Forrest; it’s a grounded and collected performance as he’s not an obvious, over-the-top dogged detective who’ll stop at nothing to bring the criminal down but rather, he’s an average joe with a wife and two kids who’s just turned 40 and he just wants to do his job well. The part probably could’ve been played by anyone but Affleck gives it his all and he handles both the dramatic and comedic aspects of the script very well – his eventual meeting with Forrest provoking the biggest audience laughs due to Affleck’s comically dumbfounded expression.

Danny Glover (he ain’t too old for this sh#t!) and the smoky voiced Tom Waits also star as Forrest’s partners in crime, Teddy and Waller, and they both put in good performances but they aren’t in it for long enough and their characters are wholly underdeveloped, and Tika Sumpter, Ari Elizabeth Johnson and Tegan Johnson are really great as Det. Hunt’s wife and kids – the latter two in particular are very impressive young actors!

David Lowery’s direction is effective because he keeps the film moving at an even pace, he perfectly captures the characters’ feelings and facial expressions, and he deftly balances the gentle humour with moments of occasional drama and elsewhere, Daniel Hart’s smooth, jazzy score – filled with mellow piano and peaceful guitar – helps to establish that laid back atmosphere and Joe Anderson’s cinematography lovingly recreates a late seventies/early eighties vibe. 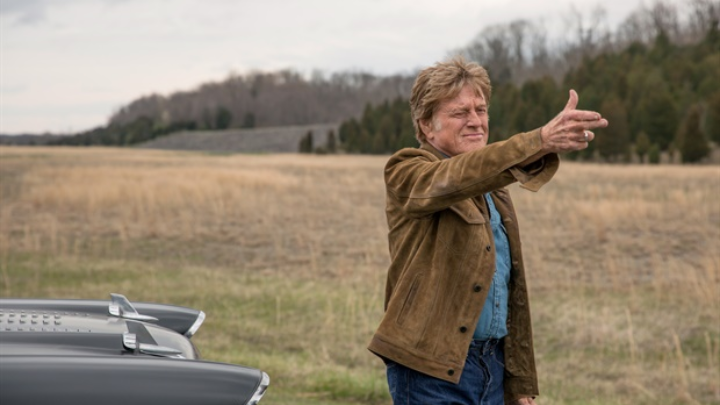 A very different kind of heist movie, The Old Man and the Gun is a laid back and mellow film with several strong performances, sharp dialogue, a smooth soundtrack and striking cinematography.